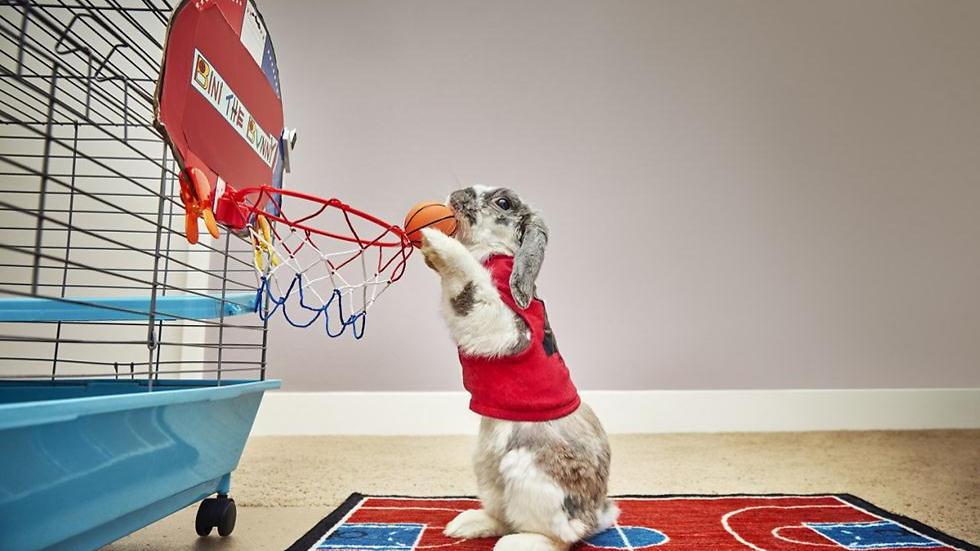 Hop to it: Israeli bunny sets Guinness World Record with most slam dunks in one minute with seven slams; rabbit to star on cover of Guinness's Amazing Animals Book; proud owner: 'Important for me to stress to despite the fact we live in Los Angeles, book should say we're Israelis.'

A slam-dunking bunny named Bini—and his Israeli owner Shai Assor—were included in a Guinness Book of World Records that centers on animal records and was launched Thursday.

Bini holds the hotly contested record for most basketball slam dunks made by a rabbit in a single minute.

Bini doing what he does best (Photo: Guinness World Records)

"Performing this feat was really challenging, because Bini had to hop more than 50 centimeters back and forth carrying the ball, all the way to the basket and then back again, and all without human intervention," his owner Shai explained.

A profile piece on Bini
X

A profile piece on Bini

Bini managed to set—and create—the record at seven dunks. "I never doubted he'd break the record. I was really pleased Guinness loved him because I've been trying to show the world bunnies aren't as stupid as they look for years," Assor spoke of his life's work.

Bini, who's five (unknown how much that is in human years), first made headlines in 2013 when a video of him making shots like a pro went viral. His talents were carefully nurtured over the years and have now come to full fruition with the world record, which led to Bini's starring turn on Guinness's Amazing Animals Book.

This kind of skill set doesn't just develop by itself, Assor assured. "It all started with simple tricks like standing up, jumping on command and turning around. I saw he was interested in a ball, so I bought him a basket. It took several weeks to train him," he said.

Bini poses with his basketball (Photo: Guinness World Records)
"I could really see him beginning to communicate and understand me. He'd take the ball and it dawned on him to put it in the basket, and I stood on the sidelines feeding him snacks. He's a domestic bunny. He loves his place and his room. He's cordial to people and lets them pet him," the proud father said in a Ynet interview three years ago.

In the intervening time period, Bini has proven to be something of a global brand, with more than 300,000 fans who have been following him on Facebook and YouTube.

Apart from his mad b-ball skills, Bini has also shown other proclivities towards painting, hair combing and operating the infamous claw machine, which, in Bini's case, grabbed vegetables. Video of this latter accomplishment received more than 14 million views on YouTube, perhaps representing a nadir for Western civilization.

The rabbit's abstract period on display (Photo: Shai Assor)
Last year, Shai and Bini went to seek their fortunes in Los Angeles, where the leporine star received widespread interest from American media. Morning shows on local CBS, ABC and Fox affiliates all covered his story, joined by other international media entities who have shown interest in Bini after the new record. "It was important for me to stress to Guinness that despite the fact we live in Los Angeles, the book should say we're Israelis. We'll never forget where it all began and where Bini truly belongs," Assor showed fame had not yet gone to his head.