MIckey Gitzin. The NIF has failed to penetrate the heart of the Israeli public 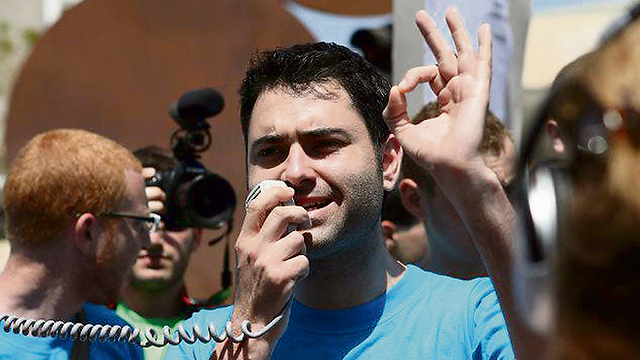 Op-ed: The achievements Israelis take pride in—agriculture, high-tech, water desalination, religious tolerance and the integration of minorities—have nothing to do with the New Israel Fund, but rather with the Jewish mind and with the way a nation state deals with its minorities.

Last weekend, Yedioth Ahronoth published an interesting interview with Mickey Gitzin, the new executive director of the New Israel Fund (NIF). Gitzin boasted that the NIF creates the Israel we take pride in, while the Right, one way or another, represents the other Israel—the nationalistic, racist Israel, which burns Arabs’ olive trees and is funded by transgressors’ money. Let’s put the superficial and generalizing arguments aside for a minute and focus on the strange thesis produced by the NIF in regards to its social role. I assume that Gitzin, as an intellectual person, and the rest of the NIF management members know in their heart and mind that it’s not their fund which is responsible for the strength of Israeli democracy, but rather a years-long tradition of Israeli governments from the left and from the right.

Gitzin. Precisely because of its support for marginal left-wing organizations, the NIF’s influence is marginal
They surely know that the achievements we take pride in abroad—agriculture, high-tech, water desalination, religious tolerance and the integration of minorities that want to be a part of it all—have nothing to do with the NIF, but rather with the Jewish mind and with the way a nation state deals with minorities living in its midst. Even the attitude toward the LGBT community doesn’t really have anything to do with the NIF, but with a global trend of tolerance and openness in democratic states. This is where we should give credit to the NIF for what it does do: It does invest money in organizations that help weak groups in the Israeli society—from members of the Ethiopian community through abandoned wives to Arab groups. But the monopoly that Gitzin and his friends have taken over social justice and over helping the weak is a fake monopoly, and so is the story they are telling themselves about the broad influence—a story which is only convenient for raising money abroad, and for creating a dangerous enemy among the loud opponents from the Right. There are hundreds and thousands of people and organizations involved in charity and in a social change in the Right and in the center. I am personally a member of several organizations which are far from being left-wing, but are trying to make a change for Israel’s sake as a democratic nation state. There are hundreds of ultra-Orthodox, religious and secular charity organizations which offer time and capital, alongside organizations which try to provide fishing rods rather than fish. They are very far from the Left. And anyway, who says that supporting the disabled people’s struggle for higher pensions, for example, is a better form of social justice than supporting the development of an employment, taxation and reward system for disabled people who integrate into the labor market? These are ideas raised by the capitalistic, “hoggish” Right. Now we can come to the NIF’s biggest problem, the source of its limitations: It chose to spend a lot of money on social organizations—some more successful, some less—alongside a considerable financial investment in organizations that publicly attack the State of Israel. That is its most significant and most influential decision, not the story about the change. Their investment in the Adalah organization, which is trying to change Israel’s character from a nation state to a state of all its nations, thereby putting an end to the Zionist dream—and no matter how often the NIF declares that it’s a Zionist organization, they keep supporting it—is more significant than dozens of organizations. Their support for Breaking the Silence, which is waging a persistent battle abroad to smear Israel’s reputation, and for other organizations that are flirting with the BDS movement—because they are not allowed, according to the NIF, to publicly support BDS—is what determines the NIF’s nature. Precisely because of its support for marginal left-wing organizations, the NIF’s influence is marginal. It has failed to penetrate the heart of the Israeli public even when it’s right, which is why it finds it difficult to create an impact. If I were an American donor who wishes to influence the battle against the Haredi monopoly over religion, or to help strengthen democracy, I would invest in brave organizations from the conservative side, like Tzohar, rather than in the NIF’s organizations. There’s a lot of room for improvement in the Right. The Right can’t exclude itself from a discourse about minorities and rights, it can’t create large funds only when it comes to building in Judea and Samaria, and it should deal with abandoned wives as much as it deals with redemption of lands. The Right can’t be abandoned to an image of the Lehava organization. This may be convenient for Gitzin, but it’s far from the truth. And most importantly, the Right can’t accept the monopoly that Gitzin and his friends are trying to appropriate over the love of man, helping the weak and creating a social change. This is a highly distorted and problematic message.