Four of the 18 couples that were remarried in Holon
Photo: Tomeriko 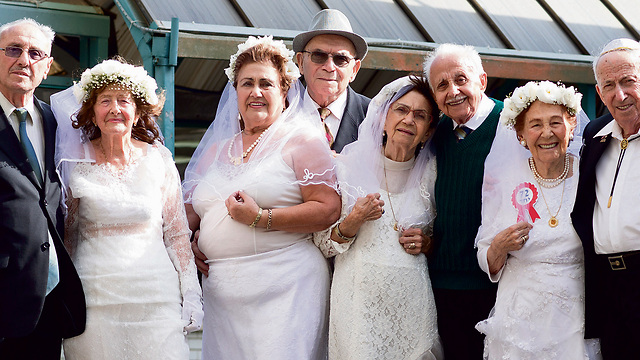 Happily ever after: More than 50 years on, Holocaust survivors renew their vows

It’s not every day that 18 couples are married at the same time, especially when the average age of the brides and grooms is over 80. Young couples may need a luxurious banquet hall and expensive gifts, but these people, who celebrated their first wedding with only 20 guests and sewed their own outfits, wouldn’t change a thing; ‘As long as we’re together, nothing else matters.’

As the couples came together in a particularly festive atmosphere, they affected everyone with their excitement. It’s not every day, after all, that 18 couples are married at the same time, especially when the average age of the brides and grooms is more than 80.

As part of a conference for the exhaustion of Holocaust survivors’ rights, the Senior Citizens Service at the Holon Municipality decided to go one step further and offer all survivors who have been married for more than 50 years a vow renewal ceremony.

Eighteen couples accepted the offer, including two couples of immigrants from Russia who were finally able to get married in a Jewish wedding. The men wore festive suits, the women showed up in donated wedding dresses, and students from the Naamat Holon high school took care of the photography and of the brides’ hair and makeup.

From right to left: Eliezer and Rachel Greenfeld, Bernard and Jenny Ursu, Michael and Sonia Castro and Shulamit and Shraga Katzberg (Photo: Tomeriko)

Holocaust survivors Rachel and Eliezer Greenfeld have been married for 72 years. They were both born in the Polish city of Lodz.

After World War II, Lodz was turned into a training and organization kibbutz ahead of Aliyah Bet—the codename given to illegal immigration by Jews to the Land of Israel during the British Mandate period between 1934 and 1948—and Eliezer was given the role of treasurer.

When Rachel paid a surprise visit to his workplace, he announced to everyone: “Meet Rachel, my fiancée. We are going to get married.”

“We were 20-year-old kids,” Rachel recalls. “I returned from Auschwitz to Lodz and I thought I would meet someone from my family there. I didn’t meet anyone, but I met him, going with one of my girlfriends. He asked if he could walk me home, and he has been walking with me for 72 years now.”

The first wedding was held in Lodz. “There were about 50 people, and that was considered a lot at the time,” says Eliezer. “We were preparing for an illegal immigration to Israel, so everything was done in great haste. The bookcase we had was barely removed so that we would have a room for the wedding night, and when it finally was removed, the room was very small. But at least the bed fit in,” he concludes with a smile.

“We had nothing,” Rachel adds. “I didn’t even have a veil. There were a lot of mosquitos in Poland, so our friends removed the net and placed it on me instead of the veil. We were very young and vibrant. We believed life would be good, despite everything we had gone through. I had no family left, and he said to me: ‘Don’t worry. I’m your mother, your father and your siblings.’ That’s the way it was and that’s the way it still is.”

If were getting married today, would you have a more luxurious wedding?

“The choice would be the same choice,” Eliezer replies firmly. “More food, less food—as long as we’re together, the rest really doesn’t matter.”

Our honeymoon: A movie and falafel

“We both came from Bulgaria,” says 79-year-old Sonia Castro, 81-year-old Michael Castro’s talkative half for the past 62 years. “Michael pretended to be a friend of my brother, and he would walk into our house and ask my mother, ‘Where’s Marco?’ But my mother later told me he would look for me in the rooms. That’s how we met. He would ask me out and we would go on dates with my brother. But only until 9 pm,” she laughs, “because I was 14 years old.

Sonia and Michael Castro. ‘I wouldn’t marry anyone else’
“There were maybe 20 people at our wedding,” she recalls. “We had no possibilities and no money. The wedding was held at a Tel Aviv synagogue called Hamarkolet. My family’s condition was that I would keep living in their home until he was discharged from the army, because he was only 18.5 years old. Two months later, he said to me: ‘I won’t have it. You’re coming to live in my house.’” “After the synagogue, we went back to my parents’ house to celebrate,” says Michael. “We partied there. There was no alcohol. All we drank was the drop of wine the rabbi gave us. There was someone playing an accordion, and that’s how we spent the evening. We celebrated our honeymoon the next day with a movie at the Tamar Cinema and a plate of falafel. “I still remember the dress she wore,” he goes on. “It was light blue. She wore it marvelously. Her dress was sewn by my aunt. Want to see?” he asks and pulls out of his wallet an old photo of Sonia from their wedding day. “I wouldn’t marry anyone else, only my wife! All I want is to be with her, in any shape.”

Shulamit and Shraga Katzberg. A borrowed wedding dress
Shraga and Shulamit Katzberg are a success story that began in a blind date. She is 82 years old, he’s 87. Shraga’s younger sister studied with Shulamit and made the match. They exchanged letters long before they met. He added his picture to one of the letters, dedicating it to “the cute, mysterious girl called Shulamit.” How romantic. “We got married at Beit Vaad Hakehila on Jaffa Street in Tel Aviv,” says Shulamit. “There were about 25 to 30 people at the wedding. At the time, we used to buy food with ration stamps, so the entire family and my sisters gave us their ration stamps to buy the commodities for the wedding, and my mother her sister prepared all the refreshments. “As gifts we received Wundertopfs, which were popular the time. My mother’s brother from Nahariya brought as a set of sheets. It was such a bargain, we couldn’t believe it!”

What kind of ring did you get?

“My ring is the original one,” Shraga boasts as he waves his finger. “Her problem is that she didn’t always know how to take care of things, not even of a watch I bought her,” he teases. “Don’t worry, she won’t put that in the newspaper,” Shulamit interrupts him affectionately. “I borrowed my dress from a woman named Sara Schif. Several years ago, on the wedding date, I called Sara and she told me that more than 25 girls have gotten married in the same dress since then.” If you were getting married today, would you have a modest wedding or the kind of weddings people have today? “First of all, today people marry at an older age. I was 18.5 when we got married. I was a child and no one had explained anything to me. I was headed to an unknown future. Today, thank God, we have four children and have been blessed with many grandchildren.”

Jenny and Bernard Ursu. A magnificent wedding in Bucharest
But not everyone had a modest wedding the first time around. Jenny and Bernard Ursu were married at the Great Synagogue in Bucharest 60 years ago. “It was a big, magnificent wedding with many guests,“ 88-year-old Bernard recalls. “We were even married by Bucharest’s chief rabbi, Dr. Beck.” “I had a very nice wedding,” 85-year-old Jenny says proudly. “It was slightly different from others, because there were two pairs of boys and girls carrying baskets of flowers, which they handed out to every woman who came in. I sewed not only my own wedding dress, but also the dresses of all my female relatives who arrived.” Did you drink alcohol at the wedding? “We drank some Romanian wine,” Bernard laughs, “but we didn’t really get drunk.” “You should know that we didn’t eat pork at the wedding,” Jenny interrupts. “At that time, in communist Romania, everyone apart from the government was poor, so each wedding guest paid for what he ate at the restaurant. “You’re asking about gifts? I didn’t receive any wedding gift,” she adds. “Well, except one from Bernard’s parents. But never mind, let’s not get into that.” How do you maintain a loving relationship for 60 years and even renew vows? “Anger and animosity remain outside the bedroom,” Bernard says. And Jenny adds, “The kitchen is under my exclusive control. He doesn’t even dare open the fridge on his own.”