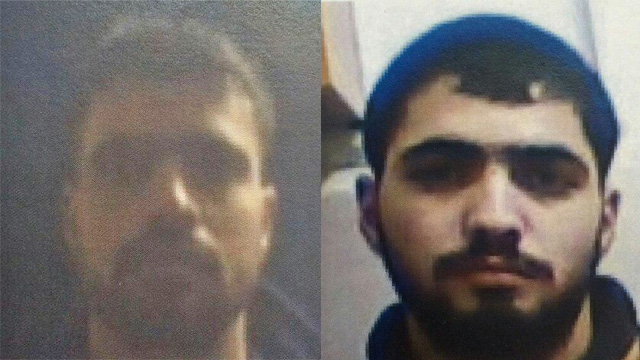 Palestinian brothers Nasser Badawi, 24, and Akram Badawi , 34 from the city of Hebron were sentenced to life imprisonment after being convicted, by their own admission, of a dozen shooting attacks in the area of Hebron.

In total, two IDF soldiers and two civilians were wounded by the brothers' terrorist attacks.

The shooting attacks attributed to the two occurred between November 2015 and January 2016. The attacks were carried out by the Badawi brothers using a sniper rifle.

The brothers were arrested in January, 2016, and were recently convicted of committing 12 offenses of attempting to intentionally cause death (a crime equivalent to a murder attempt) and several other security offenses.

The court also ordered the two to compensate each of their victims for NIS 15,000.

Shooting in the wake of another attack

The Shin Bet said that the brothers are responsible for a series of attacks.

On November 6, 2015, they met in a building owned by their father, where they went up to the third floor and entered an apartment under renovation. Akram put the gun on a windowsill facing the Tomb of the Patriarchs and started shooting. He estimated that he hit a group of worshipers near the tomb, but only later upon hearing news reports about the wounded did they realized they struck two worshipers. One worshiper was seriously wounded, the other lightly.

After the attack the brothers went to celebrate a cousin’s wedding.

It was also learned from the investigation that Nasser decided to carry out the attack following the death of an elderly terrorist from Hebron who carried out a vehicular attack near the Halhul junction that same day.

The sniper rifle (Photo: Shin Bet)
On November 25, Nasser went to the above-mentioned apartment, having taken the makeshift sniper rifle from the moseque the day before, and told his brother Akram that he intended to carry out a shooting attack alone. Nasser waited for soldiers to pass by "any other target". When he saw a soldier near the Tomb of the Patriarchs, Nasser shot at him, before realizing he had hit a car. After the shooting, Nasser returned the gun to the mosque. As a result, damage was caused to the parked vehicle, without anyone injured.

Later on, both brothers decided to carry out a shooting attack at an IDF checkpoint near Hebron and began to observe the area to see where the cameras were located. They located an open area among the stone quarries in the industrial area south of Hebron, from which they would be able to shoot straight towards the checkpoint. They shot at the roadblock several times but in most of the shootings the soldiers did not see or hear the shooting.

On the afternoon of January 3, Nasser spotted a group of soldiers near the Tomb of the Patriarchs and asked his brother Akram to urgently come to the same apartment from where they had already fired shots. Akram came with the rifle and fired at the group of soldiers, seriously wounding an IDF cadet.

That day Akram suggested to Nasser to perpetrate a shooting at the above-mentioned IDF checkpoint. The pair drove in Akram’s vehicle and positioned themselves in the stone quarries in the area, then Akram shot at the soldiers. They heard the soldiers’ shouts and fled the area. As a result of the shooting a soldier was lightly wounded.

Scene of shooting attack near Tomb of the Patriarchs in Hebron

On January 9, Nasser was arrested for questioning. A week later, on January 16, Akram carried out a solo shooting attack from a building in the Abu Sneineh neighborhood in Hebron, which resulted in no casualties. Akram said in his interrogation that he carried out the attack in order to divert suspicion from his brother Nasser, which, as noted, was arrested a week earlier.

After the attack, Akram hid the makeshift sniper rifle in a craner at a quarry owned by his family at the industrial area south of Hebron. The investigation also revealed that the brothers made a makeshift silencer from an oil filter, which they learned from an Internet video.