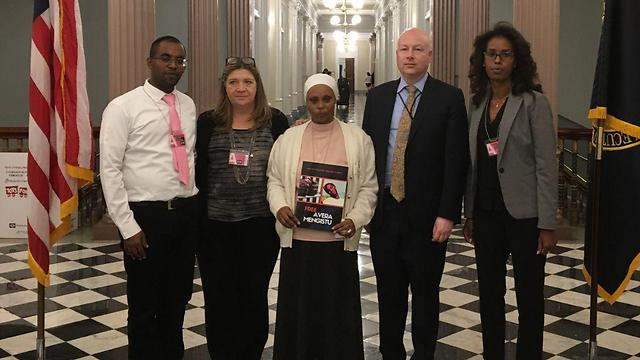 Family of Abera Mengistu, who has been held by Hamas in Gaza for over three years, visit the White House and meet with Jason Greenblatt; 'It is outrageous that Hamas will not let him return home or communicate with his family,' Greenblatt says after meeting.

The family of Abera Mengistu, who has been held by Hamas in Gaza for over three years, visited the White House on Wednesday and met with Jason Greenblatt, US President Donald Trump's special envoy to the Middle East.

"Today I welcomed the family of Abera Mengistu to the White House. Abera has been held by Hamas in Gaza for over 1,000 days since he disappeared in September 2014. It is outrageous that Hamas will not let him return home or communicate with his family," Greenblatt wrote on Twitter after the meeting.

The Mengistu family meets with Greenblatt

He also conducted a prayer in both Hebrew and English for Mengistu's return home.

The Mengistu family, which is visiting the US as part of its effort to raise awareness for the struggle to bring him home, also attended the Jewish Federations of North America's General Assembly in Los Angeles, where they met with President Reuven Rivlin.

Rivlin updated the Mengistu family on his personal efforts towards to bring their son back with the king and prime minister of Spain, with whom he met last week during his state visit to the country.

"We're standing opposite a merciless enemy who doesn't care a whit for humanitarian principles. We'll do everything in our power to bring Abera and our missing soldiers back home," Rivlin told the Mengistu family, before vowing to continue working on the matter until all Israeli civilians and soldiers are returned.

The family is also expected to visit the United Nations in the coming days.