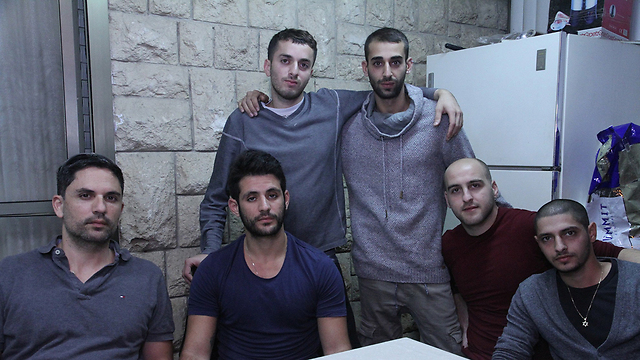 Brothers in arms of Breaking the Silence spokesman Issacharoff found to be lying about beating, abusing Palestinian during army service feel vindicated, mull legal action for slander; in videotaped response, Issacharoff challenges state attorney, gov't to take him to court.

Soldiers from the Nahal Brigade company of Breaking the Silence spokesman Dean Issacharoff—who lied about assaulting a Palestinian during his army service—were hardly surprised to learn of the decision to close the assault case, as they had been claiming he was lying for months. Issacharoff's fellow soldiers stated they are also considering legal action against him.

The case against First Lieutenant Issacharoff was opened following a video disseminated online showed Issacharoff describing in a Breaking the Silence rally how, while serving as a combat officer in Hebron, he repeatedly kneed a Palestinian detainee in the face and chest, causing him to "bleed and faint" without any operational justification.

"We knew Dean was lying all along. As their company commander, I gathered all of the soldiers who were under my command and went through everything with them again, in case there was something I might have missed. It turned out there wasn't. He was simply slandering us and now we're considering legal action against him for the damage he's done," said Seiner.

"We served in Hebron, in (Operation) Protective Edge, and never forgot to be civil, to never hit anyone and certainly to never abuse anyone. Dead caused us, the friends who fought alongside him, insane amounts of damage. Our girlfriends, our families and our friends all tried to ascertain whether we truly did what he said we did. Then we came out with a video six months ago saying Dean lied. It was simply malicious slander," Seiner exclaimed.

Maor Negev, the company's signal operator, said, "I felt very hard done by. When we tried talking to him about it, he continued saying it did happen. But we were moral and followed our values throughout our service, and it didn't happen. Now it's been proven he was lying."

Oded Reuven, another soldier from Issacharoff's company, was incensed with his mate's allegations. "My mother asked me one day, 'Why did you do it? Why did you have to act that way? Was it really necessary?' I panicked and told her, 'Mom, it never happened, that guy is just lying.'"

Amit Deri joined the former combat soldiers when they met Thursday. "We fought Dean's lies every step of the way. We tried finding out why he did it but never got an answer. IDF is a value-driven, moral army and he slandered us, besmirched our name and caused massive damage to our image. Now we're considering legal action," Deri said.

During the inquiry into the incident, both Seiner and the Palestinian allegedly beaten up by Issacharoff and his company, Hassan Giulani, provided an account completely refuting Breaking the Silence man's claims.

Deputy State Attorney Nurit Litman therefore decided Thursday—in a joint decision with State Attorney Shay Nitzan—to close the case against Issacharoff due to "lack of guilt", adding that "According to the evidence collected, the events as described by Issacharoff never took place."

While Giulani confirmed he was arrested after throwing stones at soldiers as Issacharoff described in his account, he claimed he was never beaten or bruised and had never bled or fainted.

The evidence showed that no complaint was filed by Giulani regarding use of excessive force against him and there is no documentation of any injuries on his body that, if detected, are required to be recorded according to procedures. Giulani's account also matched Seiner's version of the events.

Justice Minister Shaked, who filed the initial complaint against Issacharoff, said, "It's good the truth about this organization has been revealed, demonstrating how it profits at the expense of the IDF's combat soldiers and Israel's civilians."

Prime minister Benjamin Netanyahu remarked on the incident as well, saying, "Breaking the Silence lie and slander our soldiers the world over. Today this fact was given further proof."

Breaking the Silence chose to back Issacharoff Thursday. The organization's Executive Director Avner Gvaryahu said, "What began with the justice minister's political instruction became a political investigation and ended with a political and tendentious conclusion."

"It's unfortunate but also dangerous that the state attorney shirks his responsibility to act as a gate keeper and instead of providing protection to citizens and political activists who criticize government policy allows persecution, silencing of dissenting voices and the regime's abuse," Gvaryahu added.

Breaking the Silence's chief then noted that when a Palestinian is interrogated on an incident that took place three years ago, "it's entirely conceivable he will do anything to please them and supply them with what they're looking for."

Breaking the Silence also published Thursday the testimony of Ruben Silverstone, a company commander's signal operator. Silverstone claimed he was standing next to Issacharoff during the incident and witnessed the brutal violence he visited on the Palestinian.

"If the police and State Attorney's Office truly wished to uncover the truth, they would have questioned (Silverstone) as well," Breaking the Silence said. In response, State Attorney sources said they were not familiar with the witness or his account.

Issacharoff's attorney Gaby Lasky said, "Dean stands behind his account of what transpired. In the entire history of the occupation, never has an investigation been opened so quickly, never has a Palestinian victim been found so swiftly and never has a decision been made so rapidly. All of that taken into account, along with the minister of justice's personal involvement in the case—as someone interested in promoting legislation against Breaking the Silence—strengthens our suspicions the decision was political and had little to do with reality."

In a video he published Friday, Issacharoff attacked the government and State Attorney's Office for closing the case against him, while also providing footage of fellow soldier supposedly corroborating his account.

"The State Attorney's Office is being servile to Minister of Justice Ayelet Shaked at my expense and attempting to silence criticism of the occupation. The right-wing government is terrified of the truth, and rightfully so. No political allegation or political campaign can obscure the truth," Breaking the Silence's spokesperson said.

"Why do you think the state attorney didn't consider the testimony of a company commander signal operator named Ruben who was standing next to me as I was kneeing the Palestinian in the face? Maybe it's because it wouldn't align with the conclusion the State Attorney's Office knew Shaked was expecting?" Issacharoff wondered.

The video then cut to Silverstone's testimony. "This is not a lie. I saw dean hitting the Palestinian," he said.

Cutting back to Issacharoff, the Breaking the Silence man said, "If I take responsibility for my own violence, the government will also have to take responsibility for sending us to serve in the territories. You sent me to the territories and now you want to silence me? It's not going to happen. As long as there's occupation, there will be soldiers breaking the silence."

A still from Dean Issacharoff's video

"I know what I did and no political campaign can change that. These hands beat up a Palestinian in the territories. I'm not proud of it, but I'm not going to let you obfuscate reality either. I'm not scared of the truth. I call on the state attorney and the government: let's go to court. Are you coming, or are you cowards?" Issacharoff concluded.