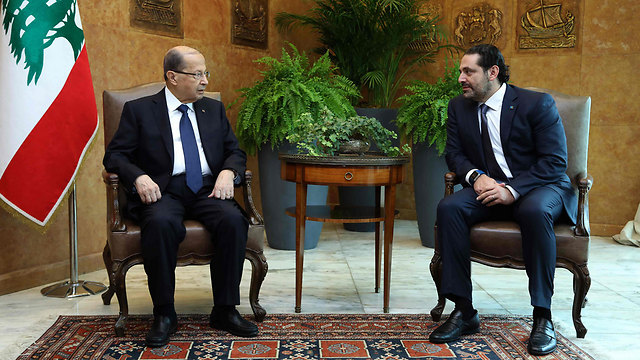 Day after returning to Lebanon from Saudi Arabia from where he announced his surprise resignation as prime minister two weeks ago, Saad al-Hariri says president 'urged me to wait.'

Lebanon’s Saad al-Hariri on Wednesday suspended his decision to resign as prime minister at the request of President Michel Aoun to allow for dialogue, easing a major political crisis.

Hariri made his announcement after returning to Beirut on Tuesday night for the first time since his November 4 shock resignation in a statement broadcast from Saudi Arabia.

President Michel Aoun (L) with Saad al-Hariri (Photo: AFP)
He said all Lebanese parties must commit to keeping Lebanon out of regional conflicts, a reference to the powerful, Iran-backed group Hezbollah whose regional role is a source of deep concern in Saudi Arabia. He said hoped his decision would open “a new gateway for a responsible dialogue”.

“I presented today my resignation to President Aoun and he urged me to wait before offering it and to hold onto it for more dialogue about its reasons and political background, and I showed responsiveness,” Hariri said in a televised statement.

Lebanese state officials and senior politicians close to Hariri say Riyadh forced him to quit and held him in the kingdom, which Saudi Arabia and Hariri have denied.

The resignation took even Hariri’s aides by surprise. Hariri’s return to Lebanon followed an intervention by France.

A long-time Saudi ally, Hariri cited fear of assassination in his resignation speech, and attacked Iran and its powerful Lebanese ally Hezbollah for sowing strife in the Arab world.