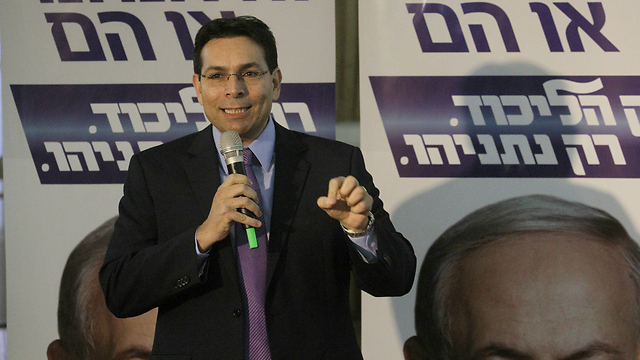 New details regarding alleged corruption by Israel's UN ambassador suggest he colluded with Zionist NGO to ensure support by handing paid positions to Likud members and their families.

Israel's UN Ambassador Danny Danon allegedly instructed paid jobs be offered to multiple Likud activists, including deposed Nazareth Illit mayor Shimon Gapso, according to the latest details regarding suspicions that he paid millions of shekels in public funds to party members and their families for support in the party's primaries.

According to a Channel 2 News investigative report broadcast on Tuesday, Danon handed out jobs in the "Making Zionism" non-profit organization, in collusion with his confidant and the organization's director Yaakov Hagoel, in return for primary support.

Activists and their children received jobs as "Zionism coordinators" with the non-profit.

New allegations against Danon came to light (Photo: Ido Erez)
The instructions Danon allegedly gave the organization included contacting Likud MK Jackie Levy in Beit She'an, finding someone in Or Yehuda acceptable to the mayor, waiting on Andrei Ouzan (the cousin of the minister of the Negev and Galilee) in Be'er Sheva, finding a man close to Likud activist Shlomo Levy in Rishon Lezion and speaking to the mayor of Nazareth Illit.

The Nazareth Illit mayor in question was Gapso, a longstanding Likud activist removed after being convicted of accepting bribes.

Following the conversation with Gapso, the report claimed, his son Eliran was given a paid position at the organization's director of Zionist activity in the non-Jewish sector.

Former Nazareth Illit Mayor Gapso's son was allegedly given a paid job by Danon (Photo: Avishag Shaar-Yashuv)
In reality however, Eliran Gapso's role was to bring together Druze activists to operate on behalf of Danon in the Likud primaries. The report also published an email Gapso had sent during the 2014 primaries to the organization that included a list of Druze party members expected to support Danon. In addition, the non-profit's list of paid coordinator for 2017 was presented, and was shown to include the daughter-in-law of a Likud activist, a Likud Central Committee member, a Likud branch chairman and others that raised suspicion.

The organization has also been planning conferences for Danon using its own funds, the report said. In one example, it organized an event which was attended mostly by Likud activists, and in which Danon gave the keynote address.

Other examples included an event two years ago reenacting the November 29 UN vote on Israeli independence, with Danon and Hagoel onstage. A year later, when Danon was already UN ambassador, he spoke at the organization's anti-BDS conference.

Responding to the allegations, Danon told journalists in New York he had been involved in no misconduct.

"An historic occasion is taking place here, where the historic vote leading up to the founding of the State of Israel took place. Last night, in unsurprising time, a report was broadcast ahead of this important event. I have been active in the civil service for over 20 years in a variety of roles and my conduct has never been questioned," Danon said.

"Before being appointed ambassador to the UN, I served as chairman of the World Likud Movement for nine years. Anyone familiar with these national institutions knows they are made up of departments according to political parties," he explained.

"The Likud movement also has one department headed by a Likud man, and I believe national institutions have a place for members of Meretz, Labor and Likud. I'm committed to continuing to promote and work on behalf of Zionist values as I'm doing today," he added.

The Making Zionism organization also responded to the broadcast, dismissing the claims as "absurd and baseless."

"The organization's people are administering their duties based on the values of Zionism, love for Israel and (a desire to) contribute to the country."