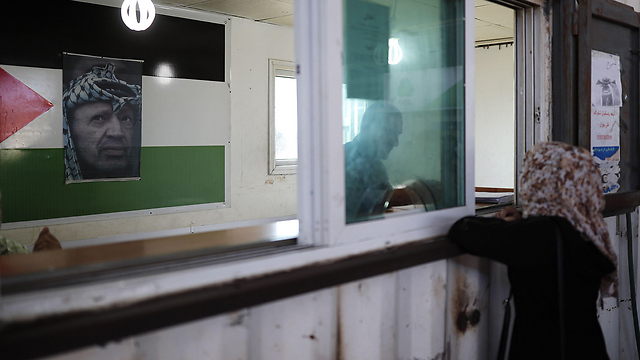 About 100 Palestinians who need to visit US Consulate allowed to cross into Israel Wednesday; Israel is expected to run similar shuttles in the future, though no schedule has been set.

Israel on Wednesday launched a program to provide shuttle service for Gazans who need to travel to the US Consulate in Jerusalem—an operation that could ease one of the many restrictions it places on Palestinians who want to exit the blockaded territory.

Israel allows only a small number of Gazans to travel through Israel—mostly for medical care or other humanitarian grounds. It cites security considerations for the tight restrictions.

In recent months, it has barred Gazans from entering Israel for visa interviews at the US Consulate after some applicants fled into hiding in Israel to seek work. The restrictions have prevented several hundred people from applying at the Consulate for visas to travel or study in the US.

About 100 Palestinians were allowed Wednesday to cross into Israel and board two buses bound for Jerusalem. They were accompanied by officials from the Palestinian Civil Affairs Committee, an office that coordinates cross-border movement with the Israelis.

Ahmed Ouda, who went to the consulate with his wife and teenage son, came home disappointed. Hoping to visit his brother, a US citizen who lives in California, Ouda said the entire family, including younger children who remained behind in Gaza, were turned down for visas after his interview.

"We spent 12 hours, mostly without access to water and services, and we were rejected at the end," he said. "It's an exhausting process; thank God my young children did not need to come and experience it."

Mohammed al-Maqadma, spokesman for the civil affairs committee, said Israel is expected to run similar shuttles in the future, though no schedule has been set.

"It could be two days a month, one day every two months," he said. "I think this is part of the Israeli policies that we don't know their goals."

Wednesday's pilot program suffered a setback on its first day, however, with the apparent disappearance of two Gazans. Travelers on the shuttle said one man fled into a taxi at the border crossing, while a second person did not return on the bus. The travelers requested anonymity, fearing trouble with Israeli authorities.

The Coordinator of Government Activities (COGAT), which coordinates cross-border movement, said Wednesday's shuttle came after months of work with both the American Consulate and Palestinian officials. It said the program, meant to balance the needs of Palestinian civilians with Israeli security concerns, would continue.

"In the near future, additional shuttles will be scheduled on dates to be determined by the American Consulate in coordination" with Israel, it said.

Israel and Egypt imposed a blockade on Gaza after the Islamic militant group Hamas seized control of the territory from the Western-backed Palestinian Authority. Both countries say the blockade is needed to prevent the flow of Hamas militants and weapons across Gaza's borders.

But the closure has had a devastating impact on Gaza's economy, and tens of thousands of Gazans remain unable to travel abroad for jobs, family visits and study opportunities. Those who need visas to travel to the US make up a tiny fraction of all travelers stuck inside Gaza.

A US State Department official said, "We seek to facilitate travel to the United States for all legitimate and bona fide travelers, including residents of Gaza." The official, speaking on condition of anonymity under department regulations, referred questions about exit permits to Israel.

The State Department requires people to schedule visa appointments online. The website advises Gazans to schedule an appointment over 60 days in advance to allow time to apply for a permit from Israel. It says the shuttle will take applicants directly to the Consulate for their interviews.

The application process is arduous, requiring an Israeli security check and sometimes an interview with Israeli security agents. Israel says the checks are needed because Hamas tries to exploit the system to smuggle cash or goods across the border.

The new system is a far cry from a previous arrangement in which Israel granted Gazans full one-day permits, allowing them to go on their own. In some cases, people would take advantage of the coveted permit and go into hiding, while searching for work in Israel—Gaza's unemployment rate is well over 40 percent.

According to al-Maqadma, the new mechanism will strain the liaison committee staff who will accompany the interviewees back and forth. Over 400 applicants are still waiting for their permits to be cleared.