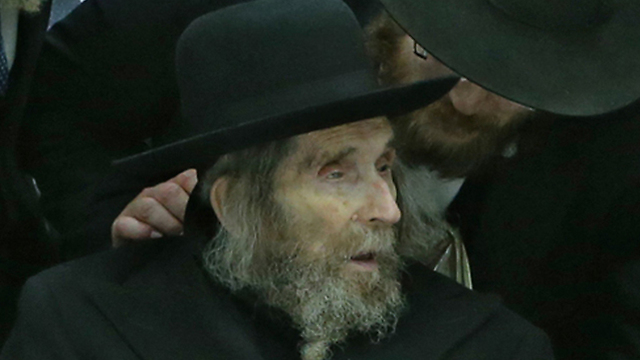 Rabbi Aharon Leib Shteinman, widely regarded as Gadol Hador (Leader of the Generation), passed away on Tuesday morning at the age of 104.

Shteinman was known for his rabbinic scholarship, relatively pragmatic rulings and extremely modest lifestyle. Hundreds of thousands of people attended his funeral in Bnei Brak.

Over the past year, Rabbi Shteinman, the leader of the non-Hasidic Lithuanian ultra-Orthodox world, has been in and out of the Mayanei Hayeshua Medical Center in Bnei Brak.

Three weeks ago, he was hospitalized again in serious condition. Despite his age, the rabbi was able to recover and was even moved from the ICU to a regular ward.

Last week, however, he ran a high fever and was sent back to the ICU. His condition remained stable until Tuesday morning, when his condition worsened, and he suffered cardiac arrest. Attempts to revive him were unsuccessful.

President Reuven Rivlin called him a leader who "carried on his shoulders the existential weight of the Jewish people."

"Despite his decisive positions, he knew how to convey a message in a pleasant and tender manner and out of a great love for every Jew," Rivlin added. "Rabbi Shteinman charted the path to countless of Jews, and his passing leaves one with a deep sense of loss."

Rabbi Shteinman, born in 1913, is known among the general public in Israel mostly as the leader of Degel HaTorah, the Lithuanian faction in the United Torah Judaism party, and the president of its Council of Torah Sages. Among the 13 Haredi Knesset members, only three answer directly to him—Moshe Gafni, Uri Maklev and Ya'akov Asher—but he held significant, and usually decisive, influence over both ultra-Orthodox parties (UTJ and Shas).

But politics took up only a minor part of his time. He dedicated his life to teaching, instructing yeshivot and giving counsel and blessings to those who appealed to him on matters both personal and public.

Five years ago, after the passing of the "Posek Hador" Rabbi Yosef Shalom Eliashiv, Rabbi Shteinman faced loud opposition undermining his leadership, an unprecedented thing for previous "leaders of the generation."

Because of his pragmatic positions on different public matters—whether internal Haredi issues or the relations between the Haredim and the state, the general public, and modernism—Shteinman's detractors from the Jerusalem Faction claimed he was a compromiser and too moderate compared to previous Lithuanian leaders. They crowned Shteinman's rival, the zealot and strict Rabbi Shmuel Auerbach, as their leader.