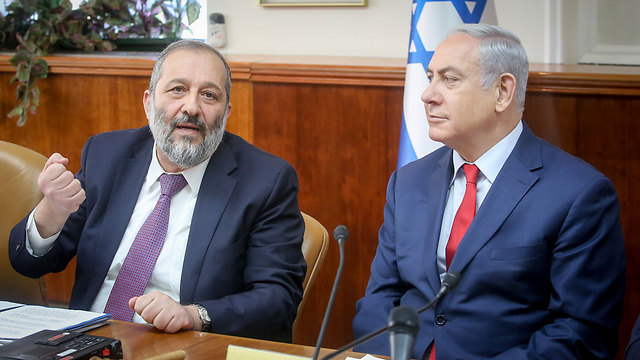 Interior Minister Aryeh Deri comes on step closer to having the authority to close supermarkets legally operating on Shabbat despite objections from coalition members, including the Yisrael Beytenu party, and even members of the Likud party.

The controversial supermarkets bill, which will allow the interior minister to cancel municipal bylaws and order the closure of businesses on Shabbat, was approved by the Knesset early Tuesday in its first reading, with 59 Knesset members voting for the bill and 54 opposing it.

By the time of the vote, the Likud had exerted pressure to form a majority after Interior Minister Aryeh Deri issued an explicit threat to Prime Minister Benjamin Netanyahu on Monday night that if the bill does not pass, he will resign.

During the stormy debate that preceded the vote, MK Ilan Gilon (Meretz) was attacked by other opposition members, led by MK Yoel Hasson (Zionist Union), for agreeing to offset his voice with that of Minister of Religious Services David Azulai (Shas), who is hospitalized and therefore cannot be physically present at the plenum to cast his vote.

MK Oren Hazan (Likud) was removed from the plenum several times for disorderly conduct and caused a great uproar when he said during his speech: "The only thing that connects us is that we are Jews—and you want to erase it? Did you lose your mind? If you don't like it here, fly to another country, get out of here."

Many members of the Knesset shouted at him in response, among them MK Mickey Levy (Yesh Atid) who retorted: "Who are you to tell me to get out of here?!" The supermarkets bill, proposed by Deri, would grant the interior minister the authority to cancel municipal bylaws, including ones that allow some businesses to operate on Shabbat.

The bill also states any new bylaw pertaining to opening shops or recreation centers on Shabbat will have to be approved by the interior minister himself. It will not apply, however, to existing bylaws approved by the High Court, such as the one allowing supermarkets to remain open in Tel Aviv.

(Photo: Motti Kimchi)
The bill was promised to the ultra-Orthodox parties to appease them following the crisis over Israel Railways holding train works on Shabbat, which threatened to dismantle the government after United Torah Judaism leader Yaakov Litzman resigned from his post as health minister.   Many Knesset members assert the bill allows for religious coercion and intervenes in the lives of secular citizens who seek to use supermarkets on the Jewish day of rest. The first of the coalition to oppose the bill in public were members of Yisrael Beytenu, who announced in an official letter that they would vote against it. Yisrael Beytenu Chairman and Defense Minister Avigdor Lieberman even went so far as to stress Monday that "whoever brings the supermarkets bill to a vote will face the consequences. If this right-wing government falls apart, the people behind the bill will be responsible." He went on to reiterate that "I support Jewish values, I support Israel's traditions and I'm diametrically opposed to religious coercion. I think I represent the majority of the people, and like most of them I do Kiddush on Friday evening and get in my car to play tennis Saturday morning. I then go to the supermarket to buy some good cheeses and fresh rolls. I don't see what's wrong with that."

"It's for that reason that Interior Minister Aryeh Deri's statement that 'immigrants from the former Soviet Union struggled to come to Israel to buy pork sausage on Shabbat' is nothing but racism," Lieberman accused.

Likud MKs Yehuda Glick and Sharren Haskel have also spoken against the bill in the past, and Haskel has announced she will oppose the bill in the vote. Haskel was threatened with sanctions for her stance by members of her party and even summoned to speak to Netanyahu personally over the matter. In the end she agreed to abstain from voting.