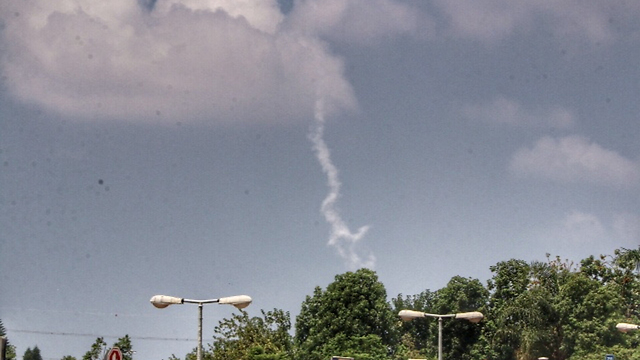 As in 2014, fragile situation in Gaza can rapidly deteriorate into war

Analysis: In the summer of 2014, when all eyes were focused on the inflamed West Bank, the Gaza situation suddenly escalated into war; the latest round of rockets suggests Hamas not exerting concerted effort to prevent launches by 'rogue factions'; unfolding events, destroying terror tunnels may turn Hamas desperate, lead to renewed conflict.

During Operation Protective Edge in June, 2014—launched in response to the kidnapping of Naftali Frenkel, Gil-Ad Shaer and Eyal Yifrach in the West Bank—we spoke to a source privy to latest intelligence information.

Although the conversation centered on IDF actions in the West Bank taken against Hamas infrastructures, the source advised us to "focus on Gaza. That’s where the real story is." We responded, "You must be confused," but he was insistent that "Gaza is where it's at."

Rocket interception (Photo: Dana Koppel)
At the time, his words seemed unreasonable. After all, all the focus was on the seething West Bank. However, one month later, Gaza became the focal point in a military campaign that lasted a difficult 50 days. Three unprecedented quiet years on the Gaza front have come and gone, during which Hamas did its level best to keep the peace and prevent rocket attacks by other orgnaizaitons in the strip.

Any occasional rockets that nevertheless came through were usually the result of internal feuds, wherein Hamas would arrest Salafist militants and make their lives difficult and—as an act of revenge—they would launch rockets into Israel.

The IDF would then strike Hamas targets—the organization being "the sovereign authority in Gaza," as per the IDF Spokesperson's Unit—and the Salafists would achieve their objective.

Now things look different. The rocket fired at Ashkelon Monday night was fired by insurgent Salafist forces who were trying, according to the IDF, to drag Hamas into a conflict with Israel.

Rocket fire has become more frequent, a few times a week, and was not aimed at empty fields but rather at population centers such as Ashkelon and Sderot. Even if Hamas was not directly responsible for the launches, it was not doing much to stop them. Ten rockets have been launched at Israel from Gaza in the past week alone. Most are related to the tense aftermath of President Donald Trump's recognition of Jerusalem as Israel's capital. Two were intercepted, and two fell in open land causing no injuries.

Monday night's incident is unique in that the city of Ashkelon was targeted and sirens were heard in communities even further north.

Hamas rockets (צילום: רויטרס)
Hamas is characteristically trying to have its cake and eat it too: Inflaming the West Bank while keeping Gaza calm; allowing rockets to be fired, but not firing them themselves; keeping the fire steady, but ensuring the situation doesn’t deteriorate too much; convincing Egyptian intelligence that it is preventing rocket launches while giving the green light to insurgents and not doing much to apprehend them; allowing demonstrations near the border with Israel but ensuring they do not get out of control. IDF sources say that Hamas is, in fact, working to keep things calm and prevent rocket fire at Israel, but the launch from the northern portion of the Gaza Strip and the irregular sequences of relatively short-range fire raise concerns of a deterioration that will spill outside of Gaza, as do the attacks and attempted attacks emanating from the West Bank in the last few days and violent protests, which may resume this weekend.

Gaza's pound of flesh to the struggle

The increase in rocket fire is good for Hamas, as it enables the organization to exhibit to its supporters' base the price exacted for Trump's declaration, and that Gaza has given its pound of flesh to the struggle.

But 2014 has proven that events can rapidly spin out of control and escalate into another violent clash. This is especially true after the IDF has scored twice in one month by finding and destroying Hamas's greatest strategic weapon—its offensive tunnels. IDF sources confirm that destroying the tunnels in which the terror organization has invested huge efforts and vast sums of money have also done their part to increase tensions. The IDF is also attempting a balancing act by ensuring relative calm while destroying the Hamas tunnel project. But they are keeping in mind that by continuing with the primary objective on the southern front—destroying the tunnels—may cause Hamas to initiate escalation that may end up resulting in war.