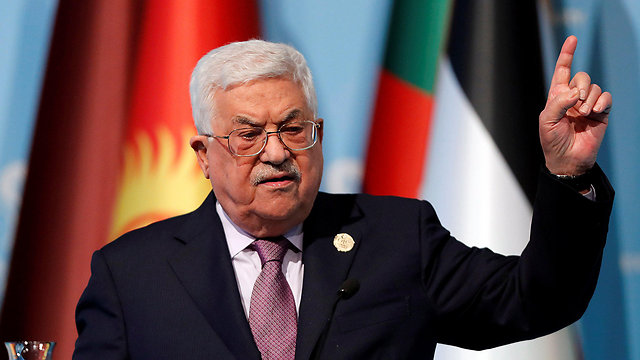 Abbas plans to use conflict of interest clause against Jerusalem recognition

Analysis: The Palestinian president, who has decided to go to the Security Council over full UN membership, will try to use a clause in the UN Charter that would prevent the US from vetoing a resolution against Trump’s declaration; the move indicates the Palestinians have decided to ‘stop playing by the rules’ vis-à-vis Washington.

Israeli officials believe the Palestinians have decided to “stop playing by the rules” in the international arena and ask the United Nations Security Council for full UN membership following US President Donald Trump’s recognition of Jerusalem as Israel’s capital.

The Palestinians wish to use the international momentum that has been created against Trump’s declaration and see the UN Security Council as a convenient place to do so.

Speaking at the Muslim countries’ summit in Istanbul, which convened following Trump’s declaration, Palestinian President Mahmoud Abbas announced that the Palestinians would turn to the Security Council for a full UN membership instead of their current non-member observer state. He also called for the UN to replace the Americans as mediator in the peace negotiations.

On Monday, the Security Council is expected to hold a closed discussion on the implementation of Resolution 2334, which was adopted about a year ago—before Trump took office—and declared the settlements illegal. Israel managed to thwart a Palestinian move to get the UN to issue a written report about the resolution’s implementation. Instead, UN envoy to the Middle East Nikolay Evtimov Mladenov will brief the Security Council on Israel’s violations in the territories. Meanwhile, the Palestinians are pressing UN Secretary-General Antonio Guterres to physically attend the discussion and inform the members of his activities to implement the resolution.

Israeli officials estimate that Abbas is interested in going to the Security Council now in order to push the Americans into a corner and force them to use their veto right for the first time, in a bid to embarrass them as they go against the entire world.

According to procedures, the only way to join the UN as a member state is to submit a request to the Security Council through one of its members. The Palestinians will likely submit their request through Egypt, which is the Arab League representative, or through Bolivia.

Joining the UN as a member state with the right to vote requires a Security Council recommendation from a majority of nine of the 15 member states. Each of the five permanent Security Council members—the United States, Russia, China, Britain and France—could curb the move by vetoing it. If the decision is supported by a majority of nine states and isn’t vetoed, it is handed over to the General Assembly, where a majority of two-thirds is required to admit the new state. The Arab and Muslim votes give the Palestinians an autonomic majority at the UN General Assembly. Their problem will be to get through the Security Council and avoid an American veto.

‘This rhetoric has prevented peace for years’

Abbas said he would use a clause in the UN Charter preventing a state from participating in a vote on a controversial issue it is involved in. This means, according to the Palestinians, that if they try to pass a resolution against Trump’s declaration at the Security Council, the US purportedly won’t be able to veto the decision. The last time such a clause was used at the Security Council was in 1960, when Argentina didn’t participate in the vote on whether the transfer of Adolf Eichmann to Israel from Argentina constituted a violation of the country’s sovereignty.

UN Security Council (Photo: AP)
US Ambassador to the UN Nikki Haley likely won’t let the Palestinians go ahead with such a manipulation and will do everything in her power to thwart it. This move indicates, however, that the Palestinians have decided to stop playing by the rules vis-à-vis the Americans and is in line with their declarations that they would no longer meet with Trump’s emissaries, Jared Kushner and Jason Greenblatt, and that the Americans would no longer play a role in the peace process.

Fighting back, the Americans slammed Abbas. "The president remains as committed to peace as ever,” a senior White House official said. “This rhetoric, which has prevented peace for years, is not surprising, as we anticipated reactions like this. We will remain hard at work putting together our plan, which will benefit the Israeli and Palestinian peoples.

"It is also important to ignore the distortions and instead focus on what the president actually said last week—the specific boundaries of Israeli sovereignty in Jerusalem are subject to final status negotiations between the parties. The United States continues to take no position on any final status issues and the United States would support a two-state solution if agreed to by both sides. We will continue to work on our plan for peace that we hope will offer the best outcome for both peoples and look forward to unveiling it when it is ready and the time is right," the official added.

According to a different scenario, Abbas won’t submit a full membership request at the first stage, but rather a proposal for a resolution condemning Trump’s Jerusalem announcement, while using the clause allegedly preventing the US from participating in the vote. As a non-member observer state, the Palestinian flag is raised at the UN alongside the flags of the member states and the Palestinians hold the same observer status as the Vatican. The current composition of the UN Security Council is relatively convenient for the Palestinians: The US, Russia, China, Britain, France, Bolivia, Egypt, Ethiopia, Italy, Japan, Kazakhstan, Senegal, Sweden, Ukraine and Uruguay. Prime Minister Benjamin Netanyahu responded to Abbas’ threats Wednesday, saying that “the Palestinians had better acknowledge reality and work for peace rather than for radicalization. They should recognize another fact about Jerusalem: Not only is it Israel’s capital, but we also maintain freedom of worship for all religions in Jerusalem. So we are unimpressed by all these declarations. The truth will eventually win, and many other countries will recognize Jerusalem as Israel’s capital and move their embassies there.” Israeli Ambassador to the UN Danny Danon slammed Abbas: “The Palestinian leadership is doing everything in its power to prevent any chance for negotiations and is making an intentional effort to thwart any initiative that would lead to progress. The international community must not let Abbas flee the negotiating table again under different excuses. It must force the Palestinian leadership to recognize reality and stop the incitement threatening the region’s stability.”