Hamas may longer be deterred by Israel
Photo: EPA 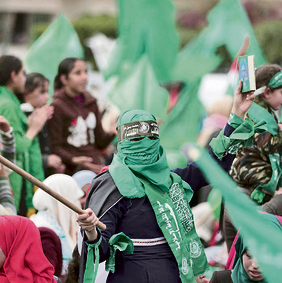 The case for the failure of Israeli deterrence in Gaza

Analysis: Despite 24 rockets launched at Israel from Gaza last week, Israel's security establishment is convinced deterrence has not been compromised; Hamas is uninterested in escalation—or so Israel assumes—but is readying for it nonetheless fearing an Israeli offensive.

From escalation to easing tensions. That is Israel's goal, to end the current round of hostilities in the Gaza Strip, hence the IDF's measured responses to recent rocket fire, and despite combative threats made by the Israeli defense establishment prior.

Hamas has entered the current round of hostilities on the back of its 30th anniversary celebrations, which were accompanied by belligerent proclamations. The defense establishment claims that while Hamas does not intend to incite far-reaching escalation, it has upped its operational readiness in fear Israel might be the one to initiate an offensive measure.

Israel has identified increasing tensions in and around the strip, and fears conflict may erupt over a misunderstanding caused by selfsame tensions.

Is Hamas still truly deterred by Israel?
Tensions on the Gaza border resemble the days preceding Operation Protective Edge, and even if no additional round takes place, Israel's defense establishment has clearly not internalized all of the previous one's lessons. Israeli officials continue analyzing Hamas intentions with absolute certainty and without qualification and are also utterly convinced Israeli deterrence remains in force, despite mounting evidence to the contrary. Defense Minister Avigdor Lieberman is of the opinion current escalation has little to do with Israeli deterrence and more to do with intra-Palestinian struggles between different factions. IDF Spokesperson Brig.-Gen. Ronen Manelis also believes Israeli deterrence did not fall to pieces in just two weeks, which sadly does not correspond to the facts. In the past week alone, 24 rockets were launched from Gaza, 13 of which landed in Israel. This compared to 40 rockets total launched in the three years and three months since the conclusion of Operation Protective Edge.

A rocket landed in a Sderot kindergarten, joining 22 other missiles launched from the strip at Israel last week (Photo: Roee Idan)
Deterrence can certainly end in a single day or any single event, such as infiltration through a tunnel or a kidnapping in the West Bank, as Hamas has directed its operatives to do from the safety of the strip. The recent rocket launches have been carried out by so-called rogue factions. The defense establishment used to say Hamas is deterred by Israel and therefore prevents other organizations from targeting Israel. Now, with rocket fire resumed, it's clear that either Hamas is no longer deterred, or saying that it can prevent launches—still smarting from the lessons of Protective Edge—is untrue. "Israel is not interested in escalation, but if Hamas wants it, then it should keep allowing extremist factions to fire at Israel. If it's not interested in escalation, however, it should terminate fire completely and soon," Coordinator of Government Activities in the Territories Maj.-Gen. Yoav Mordechai told Arabic-language BBC last week. In the same interview, Mordechai commented on both rockets landing within Israel and the two tunnels the army has uncovered. "Just as there's an aerial Iron Dome, there's an underground Iron Dome and an offensive Iron Dome," he said, sending a clear message.