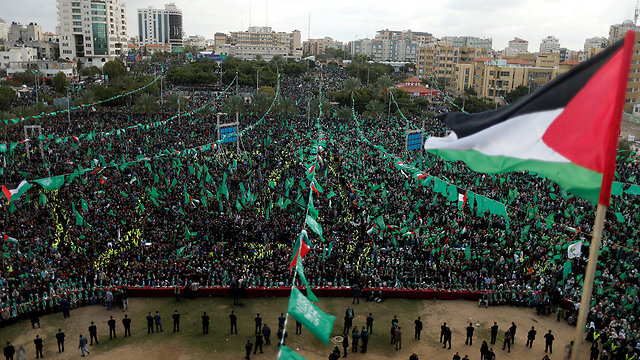 Israeli security establishment officials estimate Hamas to be operationally preparing itself for possible war, which may break out over misunderstanding; despite unwillingness to initiate outright conflict, security officials accuse Hamas of not doing enough to prevent rocket fire; Lieberman: current rocket barrage has more to do with inner-Palestinian turmoil than with failure of deterrence.

Sources within the Israeli security establishment said they believed that while Hamas did not seek widespread escalation, the terrorist organization has upped its operational readiness for fear Israel might initiate a conflict.

Israel has also noted an ever-growing air of tension in the strip, which led to fear that confrontation may break out over some misunderstanding or another, in light of overall tensions following President Donald Trump's recognition of Jerusalem as Israel's capital. While Hamas was doing its best to rein in rocket fire, Israeli officials noted, it was not doing enough to prevent it and was effectively inciting the Gaza public to demonstrate near the border fence and with calls to escalate the situation in the West Bank. This marked an attempt by the Gaza-ruling organization to implement a policy of sticks and carrots both vis-à-vis its public and the "rogue factions" firing at Israel.

Thousands at Hamas's 30th anniversary rally (Photo: Reuters)
Israeli officials further speculated that even if the Gaza Strip organizations adopted a policy of complete calm, there would still be a "braking distance" in the next few days expressed by a few more launches trickling through. Most of the rockets fired at Israel in the past week have been launched by the aforementioned rogue factions, such as the "Fatah Army" that broke off from the Palestinian Authority and is subordinate to neither Palestinian President Mahmoud Abbas nor to Hamas. Some of the rockets fired at Sderot Friday evening were regulation, with Israeli officials suspecting they were fired by Palestinian Islamic Jihad, but that hypothesis remains unconfirmed. The escalation in the strip, security establishment officials said, stemmed from two central elements: Trump's decision to recognize Jerusalem as capital and Hamas's 30th anniversary celebrations, which pushed the ruling organization's opponents to challenge its primacy.

Hamas is said to still be licking its Protective Edge wounds

Hamas, meanwhile, is said to be uninterested in escalation due to wounds that have not yet fully healed from the previous conflict—Operation Protective Edge—as well as the coming winter and its adverse effect on the Gazan populace, its desire to continue building its strength for the next round of hostilities and finally, the reconciliation agreement with Fatah.

Official Shin Bet data show that since Protective Edge in September 2014 and until the end of this past November, 100 rockets and mortars were launched from Gaza at Israel, 24 of them in November alone.

The data encompasses all launches, including those who did not make it over the border and landed in the strip itself, even if they triggered the Code Red alarm in communities on Gaza's perimeter. 12 rockets crossed into Israel in the past week, four of which were intercepted.

Lieberman: I have instructed IDF to be prepared for any scenario

Defense Minister Avigdor Lieberman inaugurated a new building in the ELSEC security plant Thursday morning, located in the Sderot Industrial Zone. "The mere fact we're here in Sderot, dealing with expanding and upgrading an industrial plant, means we can all be at ease. The last shooting from the Gaza Strip towards Sderot had nothing to do with Israel's deterrence, but intra-Palestinian power struggles between different factions," Lieberman said.

"We know what, how and when to act. I hope the people of the Gaza Strip force their leadership to invest all of their efforts and funds in improving the strip's economy rather than digging tunnels, manufacturing rockets and shooting at Israel. By continuing on that track, they are putting all of Gaza's population at risk. In any event, I've instructed the IDF to be ready for every possible scenario," Lieberman revealed.

Earlier Thursday, at least 100,000 Palestinians, including many armed militants, gathered in Gaza City to mark the 30th anniversary of the founding of Hamas. All of the organization's senior leadership was present, including head of Hamas's political bureau Ismail Haniyeh and its leader in Gaza Yahya Sinwar. In his speech, Haniyeh commented on President Trump's decision to recognize Jerusalem, and said, "This declaration is no less grave than the Balfour declaration. We will accept neither. The rage, the intifada and the revolution of our people are intended to foil this plan concocted against us. We've won by succeeding in isolating Trump and the United States with his decision. The European Union announced Jerusalem was the capital of the Palestinian state – that is a victory. We saw how they greeted (Prime Minister) Benjamin Netanyahu."

Ismail Haniyeh (L) and Yahya Sinwar
On the purported rapprochement between Israel and other Sunni actors in the Middle East, and the prospects of the US pushing the peace process forward, Haniyeh said, "Another goals of ours is to prevent the so-called 'deal of the century' from going forward. I call on my brothers in Fatah and in all factions: we, as a people, can react to this deal – normalizing relations, economic peace, backstage visits and negotiations, when there's no stage to begin with. We say: no to normalization, no to the sale of Jerusalem, no to giving up the right of return and no to recognizing Israel." Haniyeh also called for ramped up anti-Israel protests, saying, "Netanyahu is counting on you to be too tired to mount any meaningful resistance to these decisions. We must turn every Friday into a day for Jerusalem, for rage and for marches. I call on those delivering sermons on Fridays to mention Jerusalem. The nation must protest in all capitals on Fridays." "I also call on our Christians brothers and on the pope to devote their Sunday prayers to Jerusalem as well, as well as to the Church of the Nativity and the Al-Aqsa Mosque. We are the guardians of the Church of the Nativity and the Al-Aqsa Mosque," Hamas's political leader alleged.