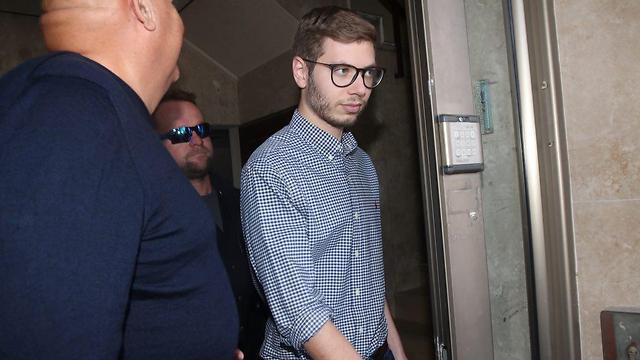 The Prime Minister's son, Yair Netanyahu, filed a libel suit against Molad: The Center for the Renewal of Israeli Democracy, a progressive Israeli think tank, demanding more than NIS 130,000 in compensation for slander, infringement of privacy and damages for publications that defame him.

According to his lawyer Yossi Cohen, the Molad Institute published false statements about the prime minister's son under the heading "5 things you did not know about Yair Netanyahu."

In a post published on the Facebook page "61", it was written that young Netanyahu does not work for a living and lives in his parents' home at the expense of the taxpayer, and enjoys heavy security seven days a week, 24 hours a day.

In addition, the post contained a picture of Yair Netanyahu dressed as clown with crown on his head.

Cohen claims that the image is slanderous and noted that the post was funded in order to increase its exposure on the social network. He also said that in the trial he would argue that "the defendant's strong and fierce hatred of Netanyahu" drove them to "attempt to harm and humiliate him at any cost while crossing red lines." Molad said in response to the lawsuit that it is intended to intimidate and silence them. "Not only are we not frightened—we congratulate the prosecution, which gives us a rare opportunity to discover in the legal process what Yair Netanyahu really does at the Prime Minister's Office, how much the citizens pay for his security on his trips abroad and what his true connections with billionaire James Packer are. "In addition, we read in the lawsuit that the representatives of Yair Netanyahu asserts that we harmed his profession. Maybe now we'll finally find out what that is." In August, Molad filed a NIS 140,000 defamation suit against the son of the prime minister , demanding compensation of NIS 140,000, as well as publishing an apology and erasing a post he published on his Facebook page, in which he called the organization "the Fund for the Destruction of Israel," "anti-Zionist" and even equated them to cancer. The suit stated that "Netanyahu committed an injustice against the plaintiff in an abominable, cynical, vile, evil and uninhibited manner, with the aim of trying to shame the plaintiff, to shed her blood, to harm her image and reputation, to sabotage her activity and to defame her in public through false statement that have not a grain of truth in them." The lawyers noted that Netanyahu acted obsessively to harm Molad and to publicly tarnish its name out of "malice and wickedness for its own sake," adding that "among other things the defendant committed cynical and cruel use of his public standing as the son of the Israeli prime minister with the aim of inciting the public against the Plaintiff."