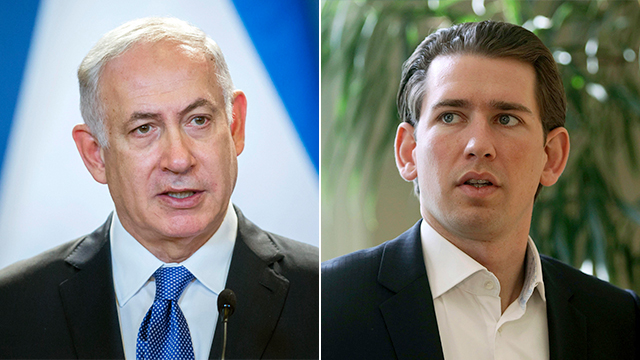 Israel to maintain ties with Austrian government despite far-right ministers

The practical meaning of this decision is that while Israel will continue boycotting the Freedom Party, it will maintain direct contact with Kurz's government.

Netanyahu and Austrian Chancellor Sebastian Kurz (Photo: AP)
Two months ago, Israeli government officials determined the Austrian Freedom Party had clear anti-Semitic characteristics, despite its efforts to hide them, according to a recent report. Israeli right-wing officials, particularly in the Likud party, have claimed Freedom Party leader Heinz-Christian Strache was pro-Israel in his views, arguing it would be a mistake to lock horns with European right wing parties who see Israel as an ally. Likud MK Yehuda Glick, for example, met with Strache last June, with the Austrian politician putting in writing a firm commitment to moving the Austrian embassy to Jerusalem in the event his party emerges victorious in the next elections.

Freedom Party leader Heinz-Christian Strache (Photo: AFP)
In 2012, Strache posted a caricature on Facebook showing a repulsive fat banker with a large hooked nose and what appeared to be Star of David patterns on his cufflinks. A year later, he was greeted with the Hitler salute by youths at an election rally. Seventeen years ago, Israel recalled its ambassador to Austria after the Freedom Party joined the government. As for now, Israel will maintain working relations with the professional echelons of the ministries headed by ministers from the Freedom Party, but not with the ministers themselves. "The State of Israel wants to stress its full commitment to combating anti-Semitism as well as commemorating the Holocaust," said an official statement.