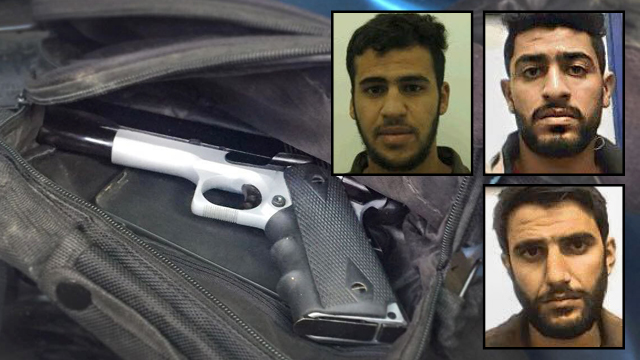 Shin Bet indicts 3 Hamas members for planning to kidnap an MK and an IDF spokesman; Terror cell later changed plans to kidnap an IDF soldier or an Israeli settler instead.

A Hamas terror cell arrested by the Shin Bet planned to kidnap Likud MK Yehuda Glick and IDF Arabic-language spokesman Maj. Avichay Adraee, according to the indictments filed against them on Wednesday.

The indictments against cell leader Muad Ashtiyah, 26, and Mahmoud Ramadan and Ahmed Ramadan, both 19, also revealed the three later changed their plans. To make it easier to carry out the attack, they decided to try to kidnap an IDF soldier or an Israeli settler instead.

Ashtiyah acquired weapons for the planned abduction and recruited the other two members. According to the indictment, to kidnap Glick or Adraee, "the defendant learned about them and gathered information on them using the internet."

The members of the Hamas cell
Glick has survived an attempt on his life before being elected to Knesset over his activism work to allow Jewish prayer on the Temple Mount. On October 30, 2014, after an event in Jerusalem, Islamic Jihad member Mutaz Hijazi shot and seriously wounded him. The terrorist was shot dead by police at his home in east Jerusalem the next day, at the end of a manhunt for him. In addition, an animation video portraying an assassination of Glick made the rounds on Palestinian social media pages a year and a half ago. Despite his uniform and rank, Maj. Adraee is considered one of the more well known figures in the Arab media. In an interview with Ynet a year ago, he said he had more than 1 million followers on Facebook, 160,000 followers on Twitter, tens of thousands of followers on Instagram and several million views on YouTube. Adraee has also become a source of information that many leading Arab news sites rely on.

But his popularity also carries with it criticism, and he's been threatened, had caricatures drawn of him, had imitations done of him and suffered verbal abuse.

MK Glick, Maj. Adraee (Photo: Saadiya Gortzki, Yuval Chen)
The Shin Bet said the members of the Hamas cell were in contact with Omar Assida, a Hamas militant and member of the Hamas top command in the Gaza Strip, who is responsible for organizing military actions and the flow of terror funds from the Gaza Strip to the West Bank. The Hamas command in Gaza provided guidance and financing for the planned abduction, the objective of which was to use the hostage to bargain for the release of Palestinian prisoners. In its investigation, the Shin Bet learned the cell members conducted observations at major junctions, main roads and bus stops in the area to gather intelligence for the planned attack. The cell leader also made inquiries about possible safe houses in the Nablus area to hide their hostage. The Shin Bet seized weapons the cell members planned to use to carry out the kidnapping, including a handgun, an electric shocker and pepper spray.