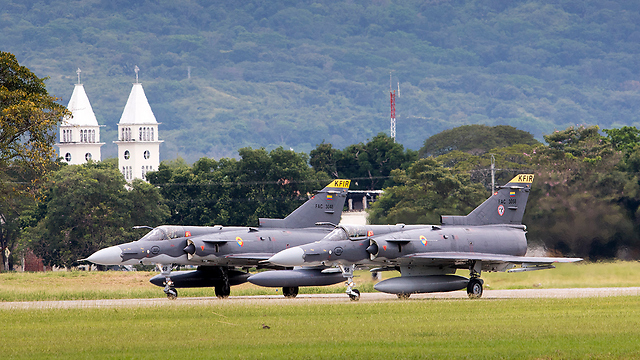 Colombia's Kfir fighter squadron, constructed and supplied by Israel, is getting a much needed overhaul ahead of the upcoming Red Flag aerial exercise hosted at the US.

Colombian security officials, including the chief of staff and the commander of the Air Force, took part earlier this month in a ceremony marking the completion of an upgrading process of 22 Israel Aerospace Industries (IAI) Kfir fighter planes belonging to the Colombian army and manufactured in Israel in the early 1970s.

This is the second and most essential upgrading project for the veteran planes, which have been serving Colombia's air force for the past 15 years.

According to Benny Cohen, director of the Lahav plant at Israel Aerospace Industries, the improvement transforms the planes, from an avionics point of view, into 4.5 generation fighter planes that will be able to compete in air battles against F-15 and F-16.

Kfir fighter jets (Photo: IAI)
As a result, the Colombian Air Force will be able to participate in the international Red Flag exercise that the United States is expected to host during the coming year. IAI is the manufacturer of the plane, based on French Mirage 5 planes that Paris refused to sell to Israel due to the embargo, and it upgraded it in the current project as well. The upgrade to the Kfir aircraft included the implementation of modern and advanced electronic warfare systems, the installation of communication systems for transferring data between planes in the structure, and the delivery of new smart helmets to pilots. The Colombian Air Force is currently based on the Kfir fighter squadron, which includes 19 single-seat aircraft and three additional two-seat aircraft.

(Photo: IAI)
The Kfir fighter jets, similar in appearance to French Mirage planes, were developed in Israel between the Six-Day War and the Yom Kippur War, and participated in operational activity mainly in the northern arena—from the 1982 First Lebanon War to the 1993 Operation Accountability.

After they were no longer used in Israel, the planes lay in the Negev for many years.

In the early 2000s, when it became clear that the planes were in good condition and did not suffer from cracks or corrosion, it was decided to sell them to Columbia, but not before their internal systems were replaced with new ones. In this version of the Kfir, the aircraft received advanced interception and radar systems that made it a multi-mission combat aircraft, and further bolstering its capabilities in air-to-air battles and ground attacks.

"The aircraft is equipped with sophisticated avionics, advanced weapon and self-defense systems, aerial refueling technology and other features that make it one of the most effective war machines in the world," said IAI's President and CEO Joseph Weiss.

"We will aid Colombia's air force and its government as its close allies."