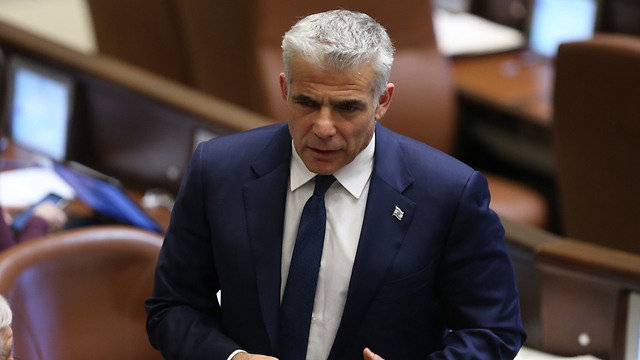 As tumultuous Knesset session gets underway for 2nd and 3rd reading of controversial bill, Lapid says appeal is already drafted and ready to present to courts; Shaked accuses him of 'trampling on the Knesset' while MKs Zoabi and Hazan removed following ad hominem volley.

Fiery debates broke out in the Knesset plenum Wednesday evening after Yesh Atid leader Yair Lapid promised to appeal to the High Court of Justice (HCJ) as lawmakers prepare to vote on a second and third reading of the Recommendations Bill, that would forbid the police from publicizing recommendations for indictments at the conclusion of criminal investigations. Those opposed to the bill have expressed deep concern over its influence on the ongoing investigations against Prime Minister Benjamin Netanyahu, who is being dragged to the final stages of corruption probes and as police draw final conclusions on whether or not to recommend to the attorney general that he be indicted. Non-coalition parties continue to oppose the bill even though its latest draft excludes from its remit investigations that have already been opened.

Yair Lapid (Photo: Amit Shabi)
According to its detractors, the bill, if passed, would potentially cushion Netanyahu from possible future recommendations if an investigation is opened against him in the Submarine affair, in which he is currently not a suspect. Netanyahu, along with Minister Haim Katz and MK David Bitan will not be able to vote during the readings due to the investigations currently being conducted against them. “Tomorrow at eight in the morning, if this bill passes, Yesh Atid will be in the Supreme Court and will submit to the HCJ an appeal against it. It is written, it is ready and will be filed,” Lapid said in a speech before the reading. “I invite all the people in the opposition who are opposed to this to join us, and if that doesn't happen I just want to say this: it is customary for parties to go to elections and say what they will do if they win. If we win in the elections, we will cancel the Recommendations Law, we will cancel the Primaries Law, the Trains Law and the Supermarket Law because all of these laws are undemocratic and they are twisted and are humiliating the State of Israel,” he said.

Justice Minister Ayelet Shaked (Bayit Yehudi) expressed her disapproval with Lapid's threats and statements, calling him out on his decision to take the matter to the HCJ.

“You don’t understand how the Knesset works. After a long discussion like this without any constitutional reason, you are running to the HCJ. You are trampling on the Knesset, and embarrassing everyone who is in here,” Shaked retorted.

Knesset Speaker Yuli Edelstein warned that if Lapid followed through with his threats to take the matter to the courts, he would not disallow the use of Clause 98 preventing a further filibuster on the vote, essentially stopping Yesh Atid from using the tactic once again to stop the bill’s passage.

Opposition members started filibustering at the Knesset on Tuesday, raising over 1,000 reservations against the bill.

“You call us all corrupt and you called me the head of a criminal organization. You, the enlightened Left are allowed to do anything,” he said as he made his address. “Either you don’t know the law or you are deliberately tricking the public.”

Zoabi attacked the opposition for what she described as their failure to tackle racism with the same alacrity with which they are tackling corruption.

MK Hanin Zoabi (Photo: Knesset)
“You are hypocrites. Shame on you all,” Zoabi screamed from the podium, to which Regev responded from the chamber: “You should have gone on the (Mavi) Marmara and traveled back to Gaza.”

During his address, Hazan accused Zoabi of being a terrorist, upping the intensity of the ad hominem volley as he told her no one would even pay a handicapped goat as a bride price for her marriage, as is commanded by Islamic law.

"You terrorist. No one would even give for you a goat with two legs. Look at yourself," he insulted.

Zoabi also did not hold back in her vitriol, telling the firebrand MK he is “a pimp who sells women for prostitution.” Eventually, Edelstein ordered that the two be removed from the plenum until the vote takes place.