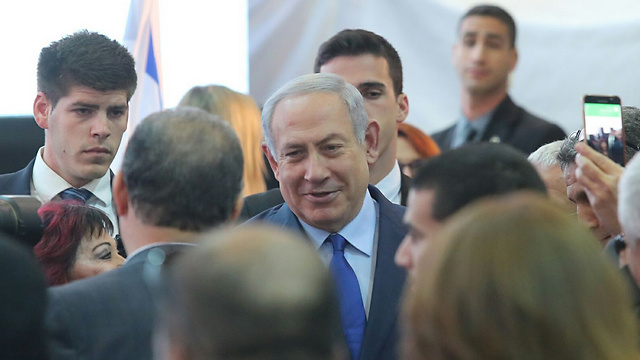 Speaking during ceremony marking the signing of a development agreement in Ein Mahil, PM says opinion polls point to significant boost in support for forging ties with Israel; ‘The governments already get it, but wide sections of the Arab populace are also starting to understand.’

Prime Minister Benjamin Netanyahu said Thursday afternoon that the general outlook on Israel was undergoing positive changes in the Arab world, citing opinion polls which indicate a significant growth in the number of people who place importance on forging diplomatic relations with Israel.

"It is already happening between the governments, but the thing that stirs the most hope for me is that, and this may surprise you, it is also taking place among wide sections of public opinion in the Arab world," Netanyahu said during a speech at a ceremony marking the signing of a development agreement in the Arab local council of Ein Mahil in northern Israel.

"How do I know this? We conduct polls and suddenly you ask the question: 'How many of you think that it worthwhile to have contacts with the State of Israel?' Once the number was zero. Today it starts with 20% and goes as high as 50%," the prime minister proudly declared.

"The public in the Arab world is starting to understand this. Israel has a foothold in the future and it is becoming one of the most developed countries on earth and we want you all to be part of this success story," he told his listners.

"When the public in Arab countries begins to understand that the State of Israel is an asset for the future, an asset to them, this is where the change begins."

Netanyahu went on to say that there is a line that separates progress from extremism and barbarity and it passes through the Golan Heights, likening it to Israel's border with Syria where the state established a field hospital where Israeli doctors treat citizens wounded in the Syrian civil war.

"They suddenly say, 'I thought you were the devil and we discovered that you are an angel.' They suddenly understand that their future and that of the future of children depends on cooperation with Israel that we are not an enemy but a necessary partner in repelling the area's radical elements," he said.

The speech was made at the signing ceremony of a development agreement with the Ein Mahal Council for the construction of 600 housing units, as part of Government Resolution 922 for the Arab sector.

Housing and Construction Minister Yoav Galant said that his ministry is "working with urgency to help provide housing and quality of life solutions for the Arab population."

Prior to the ceremony, hundreds of residents of the village of Ein Mahil demonstrated against the prime minister's visit, calling for a boycott of his.

The committee representing the residents of Ein Mahil also objected to the visit, asserting that "The village of Ein Mahil, which for decades suffered from the policy of expropriation of various governments, suffered for decades from discriminatory policies from (Israeli) prime ministers, including Benjamin Netanyahu.

The protest ahead of Netanyahu's speech

"The village of Ein Mahil is a small Arab community of some 15,000 people. It is an integral and inseparable part of the Palestinian people who are waging a struggle against the Israeli occupation and against the racist decisions of the government headed by Benjamin Netanyahu, the same prime minister who in his tenure enacted racist laws that discriminate against the Arab minority living within the State of Israel."

They mentioned Netanyahu's words before the last elections, when he called on the Israeli public to vote for his party, warning that "the Arabs are flocking to the polls" to vote against a right-wing government.

They committee then lamented Ein Mahil council head Walid Abu Lil's decision to invite the prime minister and award him a certificate of appreciation for the development agreement.

"The same certificate awards him for the poverty and unemployment (afflicting the village), for the expropriation policy of the lands of Ein Mahil, and for the lack of infrastructure and low living conditions," they stressed.

"It's a political ceremony. A visit to an Arab community has political motives and interests for a prime minister who is under investigation for corruption affairs."

In his speech, Netanyahu denounced the protest, and, addressing the demostrators directly, said: "shame on you."

"(Getting here,) I saw a demonstration. Against what were they demonstrating? Against the millions who were slaughtered and displaced from their homes in Iraq and Libya? No. They held signs against my visit. Against the only state that maintains their human rights," he chastised, noting that his government just recently decided to invest NIS 15 billion in the Arab sector.

"We believe in progress and coexistence and we will do it together," he proclaimed. "Today I was visited by a brother of Hisham (al-Sayed) who is still being held by these cruel people in Hamas. I told him and his mother that we would return him just like we brought back Ouda Tarabin and Azzam Azzam."