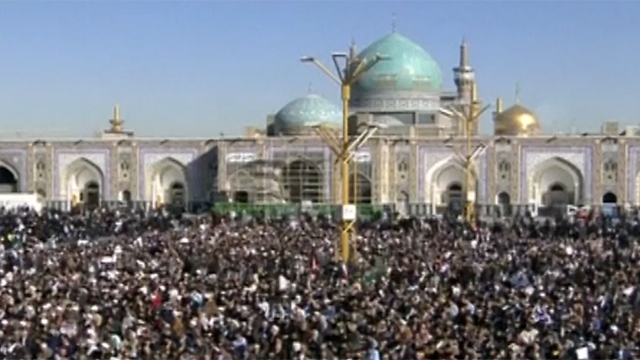 Iran rocked by simultaneous rallies for and against Islamic regime

The traditional march in support of Iran's Islamic regime took place Saturday morning, held every year since 2009 to mark the conclusion of an uprising against the fundamentalist regime. The demonstration was preceded by thousands of Iranians protesting in the past few days in dozens of cities on quite contrary grounds—against the Islamic regime and its economic policies, while also calling to halt transfer of funds to Syria and Gaza.

Pro-government rallies were scheduled in more than 1,200 cities and towns, state television said, events held annually to mark the end of months of street protests which followed Mahmoud Ahmadinejad's re-election as president in 2009.

Footage of the annual pro-regime rally in Mashhad

At the same time, social media postings said a third day of protests broke out in cities including Tehran, Shahr-e Kord and Kermanshah, where a video showed dozens of protesters booing after police announced on a loudspeaker that any gathering would be illegal. The footage could not be authenticated.

The semi-official news agency Fars said up to 70 students gathered in front of Tehran University and hurled rocks at police. A social media video showed them chanting "Death to the dictator", in an apparent reference to Khamenei.

There is discontent over unemployment, rising prices and alleged corruption. The protests have also turned political over issues including the Islamic Republic's involvement in regional conflicts such as those in Syria and Iraq.

Unemployment has risen and annual inflation is running at about 8 percent, with shortages of some foods also leading to higher prices.

"We ask people not to take part in unlawful gatherings, if they plan a gathering they should apply (for a permit), and it will be examined," Rahmani-Fazli told the Young Journalists Club news website.

Earlier this week, Iranian media outlets and users of social media in the Islamic republic reported anti-government protests were held in several places in the country, with police dispersing protesters in the western city of Kermanshah on Friday, the Fars semi-official news agency said.

About 300 demonstrators gathered in Kermanshah after what Fars called a "call by the anti-revolution" and shouted "Political prisoners should be freed" and "Freedom or death," while destroying some public property. Report of the Kermanshah rally came only a day after several such protests were staged in Mashhad in northwestern Iran, where chants such as "Death to (President Hassan) Rouhani" and "Death to the dictator," referring to the two most senior officials in the republic—President Rouhani and Supreme Leader Khamenei—could be heard. 52 people were arrested in Mashhad alone, according to reports.
Demonstrations against the regime held days ago
X

Demonstrations against the regime held days ago

The United States denounced the protesters' arrest, with President Donald Trump tweeting, "Many reports of peaceful protests by Iranian citizens fed up with regime's corruption & its squandering of the nation's wealth to fund terrorism abroad. Iranian gov't should respect their people's rights, including right to express themselves. The world is watching!"

Many reports of peaceful protests by Iranian citizens fed up with regime’s corruption & its squandering of the nation’s wealth to fund terrorism abroad. Iranian govt should respect their people’s rights, including right to express themselves. The world is watching! #IranProtests

A state television report on Saturday quoted Iran's Foreign Ministry spokesman, Bahram Ghasemi, as saying that "Iranian people give no credit to the deceitful and opportunist remarks of US officials or Mr. Trump."

One of Thursday's anti-regime protests in the Islamic republic
The demonstrations against the regime reflected fomentation among the Islamic republic's rank and file stemming from rising prices and alleged corruption, as well as dissatisfaction with Iran's costly involvement in foreign conflicts in places such as Syria, Iraq and Gaza.

The Islamic Revolutionary Guard Corps, which led the effort to quash the 2009 uprising, said in an official statement that efforts were being undertaken to rein in the new demonstrations as well. "The Iranian nation will not allow the state to come to harm," the statement said.