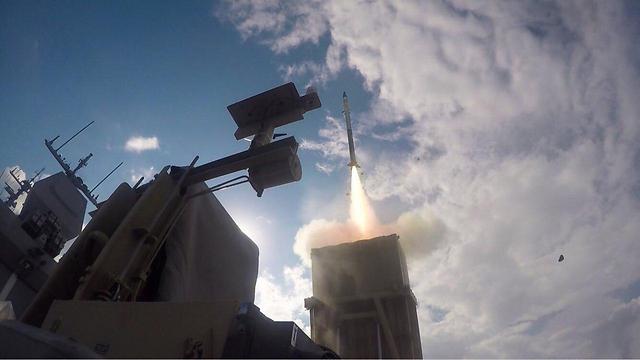 Fresh statistics show mixed pictures, with number of rockets launched from Gaza more than doubling from 15 since 2016 to 35 in 2017, but still a comparatively quiet year for southern residents; IDF thwarts more stabbing attacks, but fatalities increase compared to 2016.

A report compiled at the conclusion of 2017 points to the increased likelihood of a military confrontation between Israel and Hamas, while simultaneously indicating that the year was one of the safest for Israelis from a security perspective in the last decade. According to statistics that were published by the IDF Spokesperson’s Unit on Sunday morning, over the course of last year, a total of 35 rockets were fired at Israel from the Gaza Strip compared with 15 in 2016 and 21 in 2015.

(Photo: IDF Spokesperson's Unit)
The vast majority of the rockets that landed in Israel in 2017 fell in open space, but around ten struck in built-up areas or were intercepted by the Iron Dome missile defense system. The majority of these rockets were launched over the last two months and were sandwiched between the IDF’s demolition of two terror tunnels and US President Donald Trump’s declaration that Washington was officially recognizing Jerusalem as Israel’s capital, an announcement that sparked outrage among Palestinians and the Arab world as a whole, giving rise to numerous days of rage. The figures also take into account the overall number of rockets and mortars that were fired at Israel, the majority of which landed in Gaza and are considered failed launches. But despite the increased barrage of failed or successful strikes from the Hamas-ruled enclave, the last year is still considered by the IDF to be a comparatively quiet year for the country’s southern residents.

(Photo: EPA)
Between the year in which Hamas took control of the strip a decade ago and 2014—during which Operation Protective Edge took place—every year has concluded with the number of rockets fired at Israel reaching at least three digits. The fresh stats also record the IDF’s 59 strikes against positions in Gaza, among them Hamas observation posts and compounds used for producing weapons, training terrorisds and firing rockets. The strikes however, were all carried out in response to attacks rather than on the IDF's initiative. The Palestinian arena has been highlighted by Israel’s intelligence branches as the most volatile area that leads to confrontations with IDF soldiers, despite Israeli security forces’ successes in reducing the intensification of the wave of terror two years ago, during which Palestinian knife, shooting and vehicular attacks occurred in Israel on an almost daily basis.

Stabbing attack in Jerusalem
The security forces’ abilities to counter individual or lone wolf terror attacks has also been demonstrated by the statistics and the effectiveness of technological advancements to monitor and identify potential terrorists has been proven. In all, the IDF counted 99 attempted terror attacks over 2017 either in the West Bank or by terrorists who came from the West Bank, marking a stark contrast to 2016 and 2015, which concluded with 269 and 226 attempts respectively.

Moreover, with the IDF stepping up its operations to find materials and cash used for terror activities soldiers discovered and impounded a grand total of ten million shekels used, the army says, to fund terror activities.

Forty-two structures used for producing weapons were shut down across the West Bank and 455 illegal weapons were confiscated. But the IDF’s efforts are set to continue, with evaluations suggesting that thousands of handguns, whether homemade or authentic, remain on the Palestinian street.

Despite heightened tensions on Israel’s northern frontier, with an exchange of verbal saber-rattling between Israel and its enemies, residents in the area enjoyed a year of relative calm, with war rhetoric translating into no actual military skirmishes, which were limited to errant rocket fire caused by internal fighting sporadically landing on the Golan Heights and IDF retaliations.

With the IDF’s creation of American field hospitals on the northern border with the assistance of the Israeli government to provide medical treatment to Syrian civilians wounded in the civil war raging in the country, the military said that 2,679 people were treated as part of the mission dubbed “Operation Good Neighbor.”

Moreover, 927 Syrians were treated by Israeli medical experts as part of the humanitarian project and 12,329 hygiene products were redistributed by Israel among Syrians suffering on the border from scant sanitary conditions. In addition, 13 generators were handed out, 2,124 boxes of medical supplies, together with 694 tons of food and hafl a million liters of fuel and other goods.

On the domestic and economic front, the statistics show that the IDF invested NIS 64 million in 2017 in providing financial assistance to soldiers in need. As an annual average, 19,000 soldiers served in the IDF who hailed from underprivileged sectors of the population, 7,000 of whom were defined as lone soldiers.

An average of 1,375 soldiers served in mandatory duty, 389 of whom were combat soldiers who were already parents, a stat which points to the growth of Haredi participation in the IDF. 890 children were born to women serving in post mandatory conscription service and 19 puppies were born for the Oketz special canine commando unit.