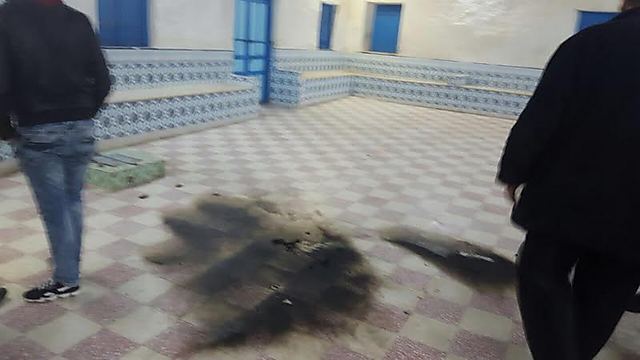 Unknown perpetrators take advantage of unrest in the country to throw firebombs into yard of synagogue in the island of Djerba, where Tunisia's largest Jewish community resides; no one was hurt, but damage caused to building.

Two Molotov cocktails were hurled at a small synagogue on the Tunisian island of Djerba late Tuesday, setting fire to the building.

The Molotov cocktails were thrown from the roof into the yard of the synagogue, which is located in al-Hara al-Kabira ("the Big Quarter"). The firebombs hit palm tree leaves—apparently leftovers from Sukkot—which caught on fire.

A reporter at the scene told the AP the synagogue was empty and the fire was quickly extinguished.

Some damage was caused to the structure but no one was hurt, the head of the local Jewish community, Perez Trabelsi, told Reuters on Wednesday.

In recent days, violent protests over price hikes have left one person dead and raised fears of broader unrest in the country that was the birthplace of the Arab Spring, with police arresting more than 200 people, witnesses and the interior ministry said.

While there were no protests in Djerba, locals said the assailants had exploited the fact that there was a reduced security presence as police were busy combating anti-government protests elsewhere in the North African state.

"Unknown people took the opportunity of the protests and threw Molotov cocktails into the lobby of a Jewish religious school in Djerba," Trabelsi said.

At the time of the attack, violent clashes were raging in some 20 Tunisian cities as people protested against rising prices and new taxes imposed by on January 1.

About 50 policemen were wounded in the clashes, said Interior Ministry spokesman Khelifa Chibani.

"Last night criminals looted and burned security centers, 45 police cars were torched and some government offices were attacked," he said. "They blocked roads and carried out robberies in many cities ... Obviously, these are not protests, but theft and damage to public and private property."

Mainly Muslim Tunisia has a Jewish minority of fewer than 1,100 people, many of them (300-500) in Djerba.  Jews have lived in Tunisia for over 2,000 years and Djerba is home to Africa's oldest synagogue, El Ghriba, which was hit by al Qaeda-linked militants in 2002 in a truck bomb attack that killed 21 people including Western tourists.