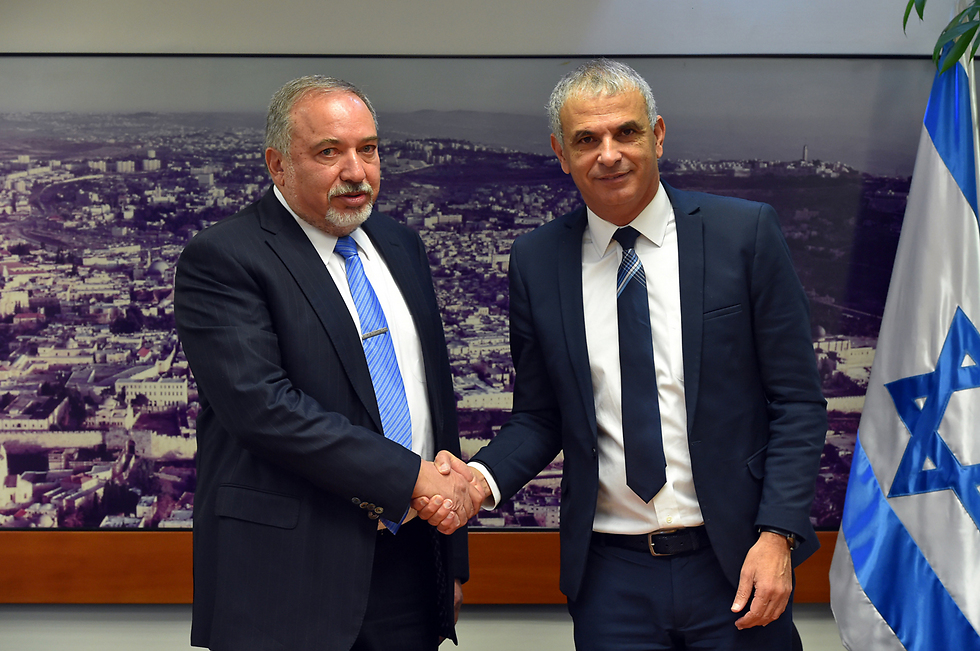 Defense Minister Avigdor Lieberman and Finance Minister Moshe Kahlon agreed Thursday to appoint a team to examine increasing the defense budget, to be headed by the head of the National Security Council, whose recommendations will then be brought to Cabinet for a vote. The two ministers' agreement came in anticipation of the Cabinet convening to discuss and vote on the state's 2019 budget Thursday. Kahlon and Lieberman also agreed on allocating NIS 150 million to strengthening and shielding structures in the northern region.

"My thanks go out to Minister Kahlon. We've proven you can reach on budgetary accords without fighting," Lieberman said. "The greatest achievement is in preserving the Gideon multiyear plan (a 5-year efficiency plan introduced by Chief of Staff Gadi Eisenkot—ed)."

Defense Minister Lieberman (L) reached an agreement with Finance Minister Kahlon to create team to examine increasing the defense budget (Photo: Ariel Hermoni, Defense Ministry)
Kahlon, for his part, concurred by saying, "Our accord proves once again that the defense minister and I know how to reach an understanding without squabbling. Our soldiers and the country's security are above all else." At the beginning of the Cabinet meeting on the budget, Prime Minister Benjamin Netanyahu said, "After deliberations between myself and the other minister, the finance minister has put forward a proposed budget. It's an excellent one. It's lean and muscular and is not overbearing." The budget also includes important tidings, Netanyahu added, namely "ensuring economic growth, by decreasing regulation and improving the services provided to Israelis. The budget and Arrangements Law both express our desire to enact a policy of growth that looks after both social needs and security."

No defense budget increase, says head of the Budgets Department

Head of the Treasury's Budgets Department Shaul Meridor said in a Ynet studio interview Thursday morning that despite the defense minister's demands to increase his ministry's budget, no such increment is planned.

"The current budget effectively represents the defense establishment's multiyear plan," Meridor said. "As we've said from the very beginning, we won't be budging from it and the budget approved (Friday or Thursday night) will include exactly what was agreed upon in that plan." Despite the acrimony and controversy surrounding the budget, Meridor professed his belief that by the end of the current winter session of the Knesset, at the end of March, the budget approval process will conclude.

Head of the Treasury's Budgets Department Meridor said no defense budget increase was planned
Regarding Welfare Minister Haim Katz's threat to vote against the budget if disability benefits are not increased, Meridor said, "The 2019 budget includes a NIS 2 billion addition for the disabled. It's an unheard of sum."

Katz was not the only minister to air such grievances, however, with other ministers already voicing their objections to budgetary items and threatening to vote against it.

Responding to allegations, Meridor said, "I'm certain many more ministers would be happy for their ministries' budgets to be augmented, but we have to be responsible and put forward a budget that does not exceed its limitations. Not everyone comes out completely pleased, but I think the vast majority will end up supporting it."