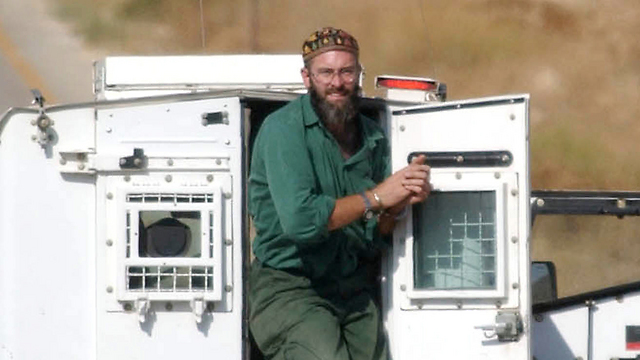 Israeli fugitive in killing of Palestinian extradited from Brazil

Yehoshua Elitzur was driving near Nablus in 2004 when he suddenly stopped and exited his car carrying an M-16 and shot and killed the Palestinian driver Sael Jabara al-Shatiya who he thought ignored his instructions to stop; Fleeing after his conviction, Elitzur was tracked by Interpol in Brazil where he was cleared for extradition.

More than a decade after he fled Israel, Yehoshua Elitzur was extradited Wednesday by Brazil to Israel where he is facing charges for the 2004 killing of a Palestinian.

Elitzur, a Jewish convert from Germany living on a West Bank hilltop, was convicted of killing Sael Jabara al-Shatiya, a Palestinian from the village of Salem in the northern West Bank in 2004. Elitzur was driving towards the settlement of Alon Moreh when al-Shatiya was heading in the opposite direction with seven passengers.

Elitzur under arrest in 2004 (Photo: Tal Cohen/Yedioth Ahronot)
According to the indictment, when Elitzur noticed the van he decided to stop the driver by stopping his car in the middle of the road before alighting his vehicle carrying a fully-loaded M-16 rifle. Standing in the middle of the road, he instructed the van driver to stop. When the driver refused to obey his command and continued driving, Elitzur approached it and threatened al-Shatiya by pointing his weapon at him at close range.

The indictment claims that due to the road conditions the car could not stop, and al-Shatiya continued driving, turning right toward the shoulders of the road with the intention of stopping there. Elitzur then shot at him once, and the bullet penetrated the car window and killed al-Shatiya.

Victim's vehicle
In his initial investigation, Elitzur said that he had thought the van driven by al-Shatiya was trying to "pull him off the road," and that he had then shot at it in order to defend himself. Witnesses that were in the car rejected his claim. Elitzur was convicted of murder in September of 2005, but he fled the country before sentencing.

Interpol issued an international arrest warrant for Elitzur, who was tracked down by the efforts of the Israeli police's international division.

He was arrested in Sao Paulo in 2015 and after being cleared for extradition by the Brazilian Supreme Court, he was put on a plane to Israel this week.

During a remand hearing on Thursday, his arrest was extended until February 2.

Elitzur’s defense attorney said that his client returned to Israel “to try and prove his innocence … He acted during while in trouble and in self-defense. That is what he thinks, and he sincerely hopes that he will be able to prove his innocence,” he said.