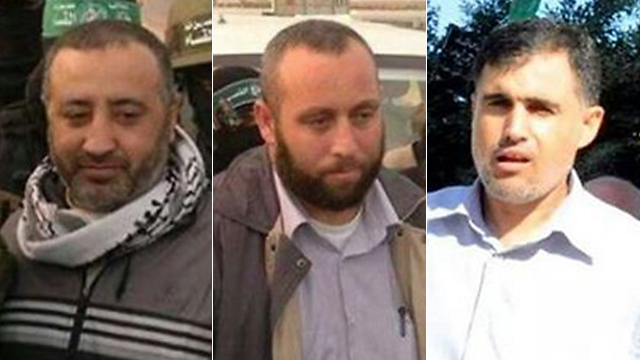 Gaza family says it has killed one of its members after the strip's Hamas rulers said he aided Israel in killing three of the militant group's commanders.

A Palestinian family in the Gaza Strip said on Friday it had killed a relative they said had helped Israel track down and kill three senior Hamas militants, including one of the man’s own kinsmen. In a statement, the family of Ahmed Barhoum said it had shot him in the city of Rafah after they were told by Hamas that he had provided information to Israel. This, the statement said, guided an Israeli air strike during the 2014 Gaza war that targeted the Hamas militants. “In light of our religious and moral commitment we have executed the collaborator Ahmed Barhoum after he was handed over by the resistance factions,” the statement said. The family said they had listened to their relative’s confession and saw the evidence against him. The Barhoums are one of Rafah’s largest families and well known for their closeness to Palestinian militant groups at odds with Israel.

The three senior Hamas commanders, from left to right: Abu Shmallah, Raed al-Attar and Mohammed Barhoum
Hamas, the Islamist movement that dominates the small, impoverished enclave, issued a statement praising the Barhoum family’s action as illustrating “its nobleness and deep affiliation with the (anti-Israel) resistance”. The Israeli military declined to comment.

The targeted killing was a joint operation of the Shin Bet and IDF.

Abu Shmallah, 41, and al-Attar, 40, were two of the most senior commanders in Hamas' Izz ad-Din al-Qassam Brigades.

Al-Attar, one of the founders of Hamas' elite Nukhba unit, was in charge of launching many Hamas terror cells who committed terror attacks in Israel and the Sinai Peninsula, where he also operated arms smuggling operations. He was also involved in the planning and commanded the operation to kidnap IDF soldier Gilad Shalit, while Abu Shmallah was also involved in the planning of the operation.

Abu Shmallah, the most senior commander in southern Gaza, was in charge of the Rafah and Khan Younis area. He began his terror activity along with al-Attar in the early 90's. Since then, he was directly involved in the execution of dozens of terrorist attacks.

Mohammed Barhoum spent many years in Syria and Libya, and was responsible for the transfer of money to Hamas in the Gaza Strip.

Over the years, Israel has established a network of contacts in the Palestinian territories, using a combination of pressure and sweeteners to entice Palestinians to divulge intelligence. Hamas has sentenced 109 people to death and executed at least 25 in Gaza since 2007. Palestinian and international human rights groups have repeatedly condemned such use of the death penalty, and urged Hamas and its Western-backed rival based in the West Bank, the Palestinian Authority, to abolish it.

Israel withdrew soldiers and settlers from Gaza in 2005, leading to a Hamas takeover two years later.