The team meets with Harry Spiro 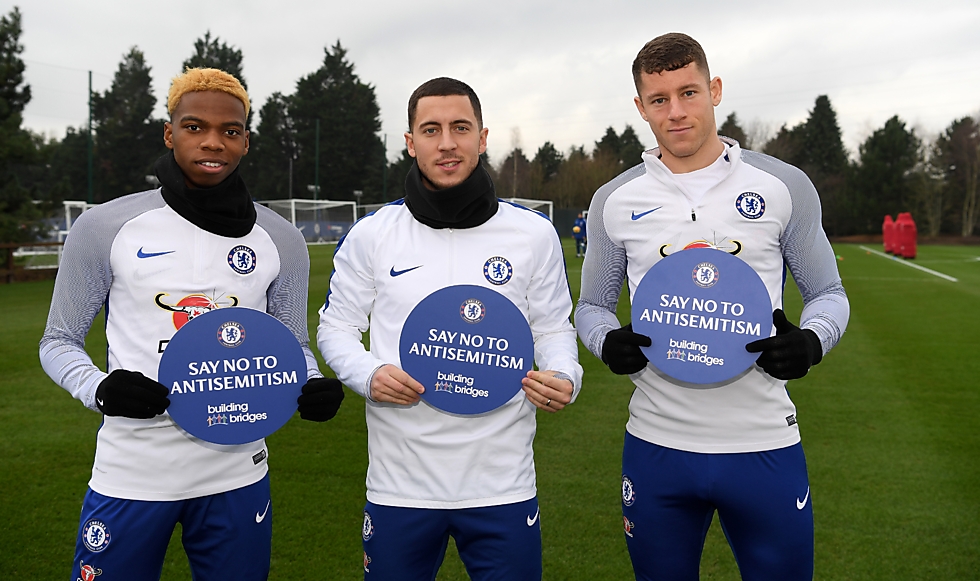 Chelsea players recently met Harry Spiro, an 89-year-old Holocaust survivor, and heard his painful story about the murder of his entire family by the Nazis; 'We're reminded there is still much to be done in the fight against anti-Semitism,' says owner Abramovich; captain Cahill tells Ynet: 'I feel obligated to spread Spiro’s message.'

LONDON - As players of Chelsea F.C. prepare for a photograph with Harry Spiro, he chides them kindly: “You nearly gave me a heart attack last night.” Spiro was referrign to the FA Cup match between Chelsea and Norwich, which eventually happily ended with a Chelsea win—but only after much suspense, extra time and a penalty shoot-out.

However, during their meeting with Spiro, the players let the match—or the upcoming league game—completely slip their minds. They were shocked when Spiro, an 89-year-old Holocaust survivor living in London, recounted to them his horrifying life story during the Holocaust, during which his entire family was murdered.

Spiro, among the only Jews of the village of Piotrków—the first Jewish ghetto in Poland—to survive the Holocaust, recently visited the team’s training facility in Cobham.

The Holocaust survivor’s visit was part of an immensely important initiative taken by Chelsea to battle anti-Semitism.

"With people around the world observing International Holocaust Remembrance Day later this month, we are reminded that there is still much to be done in the fight against anti-Semitism," said club owner Roman Abramovich, who is himself Jewish. "That’s why I am proud to have launched, together with Chelsea Football Club, this initiative to challenge anti-Semitism in all its forms. I am very impressed by the important work the World Jewish Congress is doing in this area and am delighted, therefore, with the partnership we have entered into to jointly raise awareness of anti-Semitism in sports and together make an effort to tackle it."

Spiro’s visit is actually the first event in a large-scale international campaign to fight anti-Semitism both on and off the pitch. The new initiative, headed by the team's chairperson, Bruce Buck, will be officially launched to the public on January 31, at Chelsea’s home match against Bournemouth at Stamford Bridge.

Racism and anti-Semitism are not foreign to football fields. Many fans, in many countries, call out ugly racist chants against players and fans of the rival team and sometimes even against players of their own team. But Chelsea’s project is especially important in the current climate in Europe and in Britain: the record number of anti-Semitic incidents in Britain is broken almost every year.

The internet has become the preferred and easy—too easy—arena for expressing ugly anti-Semitic opinions. Try to Google “Jewish memes” and you will discover cartoons, images and memes that seem to have been taken from Adolf Hitler’s social media account, had the Nazi leader been alive today. The ease with which a person can disseminate such hate is both infuriating and frustrating, and if there is one platform that can be used in Britain to circulate a strong message against anti-Semitism, it’s football.

Football is the official religion in Britain. On weekends, you will find more Britons watching football matches on the fields and at pubs, than at church. The ability to convey the message through Chelsea is not only a privilege, but a great opportunity. Think of all of the young fans who will be seeing their heroes over the next few months as they passionately speak out against anti-Semitism and call on their fans to reject those opinions. One cannot overstate the importance of this project and cynicism surrounding it must be eliminated.

Gary Cahill, Captain for both Chelsea and the England National Team, was much moved. In an interview just a few minutes after he and his teammates listened to Spiro’s story, Cahill looked emotional. He was so moved, in fact, that he was late for the interview. During the interview itself, the deep impression left by Spiro's story was evident on Cahill’s face.

It is encouraging to know that the captain of one of the greatest teams in the world will be an ambassador for the cause. Anti-Semitism cannot be eradicated in a day, but it is a step in the right direction—a welcome step.

“I’ll never be able to understand how a story like Harry Spiro’s truly occurred,” said Cahill, “but I feel obligated to spread his message on.”

The team with Spiro

“We were so grateful that Harry came in to see us and share his incredible story," said coach Antonio Conte. "Learning the lessons of history is so important and we must continue to pass stories like Harry’s on down to other generations so we continue to learn. My staff, my players and I were really touched by this occasion.”

Player Eden Hazard added, “It was a privilege to meet Harry and hear his experiences. When you learn about the difficulties people like Harry and millions of others affected by the Holocaust faced in their lives, it puts football into perspective. I think we all went out to training afterwards with a different mindset. Those kinds of stories stay with you and it’s important we never forget what happened.”