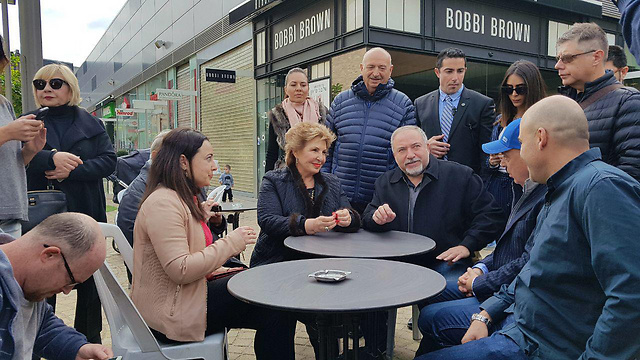 After wave of protests against religious coercion, Ashdod Mayor Yechiel Lasry accuses the defense minister, who visited the city on Shabbat and strongly sided with protesters, of making cynical use of Shabbat protests for personal gain; 'We seek to restore status quo through dialogue,' Lasry insists.

Ashdod Mayor Yechiel Lasry slammed Defense Minister Avigdor Lieberman on Wednesday, after the Yisrael Beytenu leader made a purchase in the city at an open shop on Shabbat amid growing protests by residents against increased enforcement against businesses operating on the Jewish day of rest.

"I welcome the social involvement on the matter," wrote Lasry on his Facebook page. "But I condemn all attempts by political elements—both local and national—who make divisive, cynical use of the situation for their own benefit."

"Recent developments in the city have brought about a violation of the status quo regarding Shabbat, and I am determined to restore the situation… Ashdod belongs to the secular, ultra-Orthodox, religious-Zionist (crowd) and traditional populations," said Lasry, himself an observant Jew.

Lasry expressed a desire to bring the two sides together in order to reach a solution through dialogue, adding that the municipal legal department is seeking ways to formulate a policy that will return the status quo to the city.

On Saturday night, 2,500 Ashdod residents protested near city hall against the apparent preference given to the city's ultra-Orthodox population. Yesh Atid Chairman MK Yair Lapid attended the protest to support the residents in their protest against the city's increased enforcement against businesses operating on Shabbat.

Lapid (L) at the protest

Lapid declared that the "Revolution begins in Ashdod." He told the demonstrators that the recently passed Supermarkets Law "has to go. We will annul the law because religious coercion cannot run the State of Israel… We do not need (Interior Minister Aryeh) Deri and (MK Moshe) Gafni to tell us how to have our Shabbat."

"Not the middle ages"

Protesters claim that the city is discriminating against its secular population on matters of construction and health as well.

They held signs saying "This is not the Middle Ages;" "We are here to return Ashdod to Ashdodim," and "A free Ashdod against religious coercion." Residents of other cities also participated in the protest.

Earlier during the day, Lieberman visited the "Big Fashion" shopping center in the city to express his solidarity with the protesters.

Lieberman commented on the Supermarkets Law, saying, "Those who say that the law has no significance are mistaken and misleading; unfortunately the law has far-reaching significance, the effects of which we can already see in Ashdod."

Calling for mutual respect
"Until recently, Ashdod residents lived in harmony, but now the city is divided and I hope this does not happen in other cities… This tension is the last thing we want among Israeli society. I hope that leaders in the religious community, as well as the Hareidi community, will calm down," Lieberman added.  "Just as I respect those who go to synagogue on Shabbat morning, I expect that they will respect those who go out with friends for a cup of coffee," he concluded.