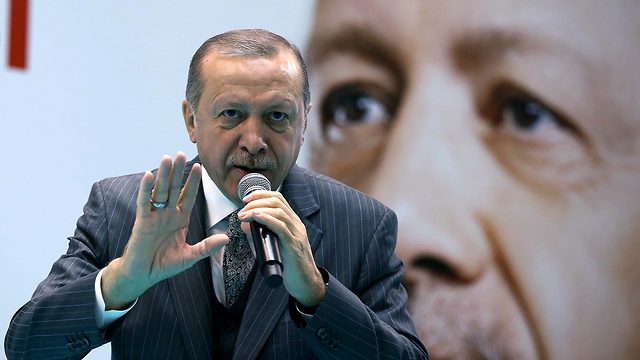 Over a week after the beginning of Turkey's offensive in Syria's northern region of Afrin, Turkish President Erdogan threatens to extend assault on the Syrian Kurdish YPG group; watchdog says 51 civilians, including 17 children, killed in Afrin on Sunday alone.

ANKARA/BEIRUT - President Tayyip Erdogan said on Sunday that Turkey will “clean” its entire border with Syria in a sign that the Turkish offensive on the Syrian Kurdish YPG group in northern Syria’s Afrin region could be extended further.

Since Turkey’s assault in Afrin began nine days ago, it has increased tensions between Ankara and the United States, which has supported the YPG in other parts of Syria in the fight against Islamic State.

“Step by step, we will clean our entire border,” Erdogan said in a speech after the army said it had captured Jebel Bursaya, a hill that Turkish media had described as a critical position in recent days.

Turkish President Erdogan (Photo: AP)
Erdogan said last week that Turkey might conduct operations eastwards inside Syria all the way to Iraq to clear the YPG from its frontier. Syrian Kurdish officials have pledged to meet any wider Turkish assault with an “appropriate response.”

More than a week into their offensive, however, Turkey and allied Syrian rebel groups have made only modest progress fighting into hilly terrain against entrenched foes.

The US-backed Syrian Democratic Forces, an alliance of militias of which the YPG is the strongest, had said earlier on Sunday that there was intense fighting in the area.

A war monitor, the Syrian Observatory for Human Rights, said Turkey and its allied rebel groups had taken the hill, which overlooks the major Syrian town of Azaz, which they also hold.

The Observatory said at least 51 civilians, including 17 children, were killed in the offensive on Sunday, including eight people from the same family. It said 66 YPG fighters and 69 Turkey-backed Syrian fighters were also killed.

Turkey says five of its soldiers and 16 allied fighters were killed in the fighting. The YPG said one of its female fighters blew herself up, destroying a Turkish tank in southwestern Afrin.

Erdogan said there were reports that the YPG was holding Turkish soldiers captive, adding that Turkey was taking steps to try to bring them back. Erdogan's statement did not make clear the number of soldiers who were missing or whether they were alive.

Reports also emerged that an ancient temple in Afrin was badly damaged in Turkish airstrikes that struck its courtyard late Friday, according to the Observatory, the YPG and the Syrian government. In a statement published on the Syrian state news agency SANA, the government antiquities department condemned the destruction of the temple.

Images showed stones piled up in the open courtyard of the temple of Ain Dara, an Iron Age Syro-Hittite temple that dates back to sometime between the 10th and 8th centuries B.C. The temple, which features sculptures of lions and sphinxes and "the giant footsteps of the gods," was noted for its structural similarities to Solomon's temple as described in the Bible.

In the images taken of the destruction, none of the statutes were still intact, with rubble and metal scraps strewn across the temple's floor.

SANA said a mosque was also damaged in airstrikes in southwestern Afrin.

A Turkish military official said the airstrikes did not target religious or cultural sites, adding that the images were insufficient to determine the cause of the damage. The extent of the damage to the temple could not be independently assessed but the Observatory said it was badly damaged.

In a speech to party members in northern Turkey, Erdogan again vowed to expand the military offensive eastward, toward the Syrian town of Manbij, which is held by US-backed Kurdish fighters.

Dozens of people gathered near the Kilis border crossing, chanting "God is great" and waving Turkish flags. Public displays of support for the offensive have been widespread in Turkey, with crowds chanting at Erdogan: "Hit, hit! Let it reverberate and let (US President Donald) Trump hear." Critics have been detained.

Separately, a cease-fire deal to halt fighting in the besieged rebel-held Damascus suburb of Ghouta failed to take hold for a second day. The deal, reached in Vienna between the Syrian opposition and Russia, was punctured by continued fighting and intense shelling in the suburb where 400,000 residents live.

Meanwhile, the Observatory said the rebels began an offensive on a government base in Harasta, following intense government shelling. The rebel offensive was met with a barrage of government airstrikes and rockets.

In northwestern Idlib, the Observatory and the first responders known as the White Helmets reported at least 12 civilians were killed in airstrikes in the towns of Saraqeb and Maaret al-Numan.

The violence comes a day before a Russia-backed conference in Sochi that Moscow hopes will steer the Syrian government and opposition toward a peace process. The two-day conference, which is expected to be attended by some 1,600 representatives of the Syrian government and opposition, is boycotted by the main Syria opposition negotiating body. The opposition says the process undermines UNled talks, which have so far failed to kick-start a political process.