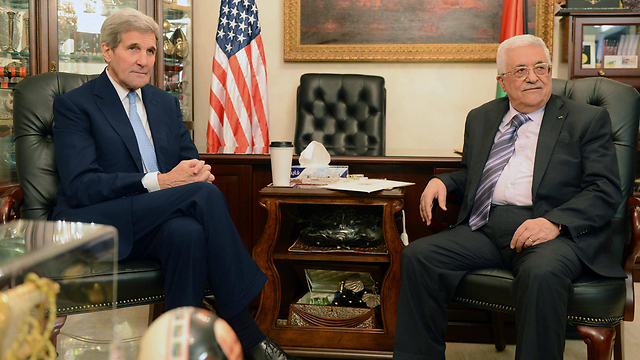 Op-ed: The ‘forces of progress’ are repeatedly encouraging the Palestinians to radicalize their stance; they are turning the ‘right of return’ into the most important thing, although there is no such right and although it’s clear that the actual demand for such a right is an obstacle to peace.

This story is inaccurate, a spokesperson for John Kerry said in response to reports that the former US secretary of state had advised the Palestinians not to yield to President Donald Trump’s diplomatic proposals.

Kerry met in London with Hussein Agha, who is occasionally mentioned as “Palestinian President Mahmoud Abbas’ associate.” Agha was one of the people who held negotiations with former Minister Yossi Beilin’s associates, which eventually led to the “Beilin-Abbas document.” The document was consolidated several days before Prime Minister Yitzhak Rabin’s murder, but was eventually renounced by both sides.

Agha’s name has also been mentioned as the person who conducted talks in on behalf of Abbas with Prime Minister Benjamin Netanyahu's emissary, attorney Yitzhak Molcho, in 2013. According to the document authored at the time, Netanyahu essentially agreed to an outline which was very close to the Clinton Parameters. But once again, the two leaders renounced the agreement.

Did Kerry really advise Abbas, through Hussein Agha, to present a tough policy vis-à-vis Trump? Going back to Kerry’s final year as secretary of state, that’s quite reasonable. The thing is that the Palestinians, with Abbas as their leader, didn’t need Trump in order to turn down any American proposal.

Kerry presented his first draft in January 2014. Then-Foreign Minister Avigdor Lieberman announced that it was the best plan Israel could get. It’s unclear whether he was speaking on behalf of Netanyahu, but it was clearly one of the rare moments in the history of the conflict in which the two sides seemed to be very close to an agreement.

Just a few weeks went by, and Kerry came up with a new draft, which was much more convenient for the Palestinians and included a division of Jerusalem. The decisive meeting was held at the White House on March 17, 2014. The Americans made the Palestinians the best offer they could make, even without Israel’s consent. It didn’t help. The Palestinians said no, even before Netanyahu offered an Israeli response.

Several weeks passed, and Kerry launched an odd, aggressive campaign in which he basically pointed an accusing finger at Israel. The Palestinians had said no, but it was Israel’s fault. Kerry, caught in the radical formula that justifies the Palestinians because they are “miserable,” explained repeatedly that terror was actually the result of poverty and turned jihad into a distributive justice movement.

Kerry and Netanyahu. The Palestinians said no, but it was Israel’s fault (Photo: Amos Ben Gershom/GPO)

It’s hard to believe that such nonsense came out of the mouth of the secretary of state of the world’s strongest power. A series of studies, including one conducted by the World Bank, have totally refuted Kerry’s argument. The economic situation of most of jihadist terror recruits, the study found, is above average. And in general, there are hundreds of millions of poor people in the world, and they don’t turn to terrorism. Only radicalized Muslims, who are not necessarily the poorest ones in the group, turn to terrorism. But let’s not confuse Kerry with the facts.

What exactly did Kerry tell Hussein Agha? That’s unclear. It’s clear, however, that “the forces of progress” are repeatedly encouraging the Palestinians to radicalize their stance. They are turning the “right of return” into the most important thing, although there is no such right and although it’s clear that the actual demand for such a right is an obstacle to peace.

Peter Beinart, one of the mentors of the Jewish Left in the United States, called on his camp in a 2014 article to ensure that Kerry and President Barack Obama’s peace proposal wouldn’t give the Palestinians less than they were offered in the Clinton Parameters.

It’s not that the Palestinians intended on compromising, but the Left already started accusing the administration of making offers which were not good enough. Beinart, let me remind you, defines himself as a Zionist.

Admittedly, peace seems far away, and one of the reasons is that Palestinian rejectionism is supported by Kerry, Beinart and many others from the radical left. Well, not exactly the left. Beinart, Kerry and others are the supporting back of the Palestinian radical right, just like they serve the radical right in Israel. The result will be one big state, and that’s no cause for celebration.