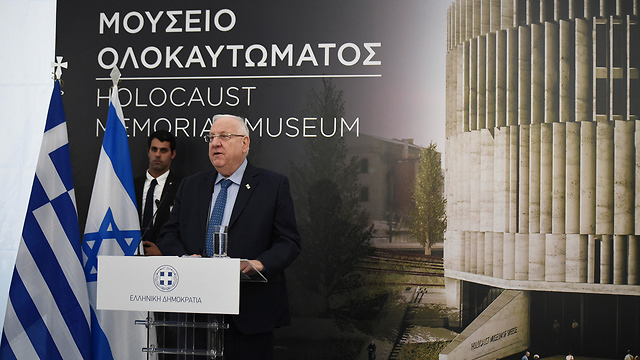 Rivlin: The Holocaust is not only a Jewish issue

President Reuven Rivlin laid the cornerstone for a new Holocaust museum at on site of old train station in Thessaloniki, Greece on Tuesday, noting as he did that the Holocaust "is not only a Jewish issue."

The Holocaust, he said, "is an international issue that touches every nation and people. Here too, in Greece, it is a national issue." "The Museum to the Holocaust to be built here will be a museum of remembrance and testimony. The Museum must express the rich history, the diversity and uniqueness of the Jewish community in Greece in general and in Thessaloniki in particular. It must give expression to the terrible moments in which this unique community was destroyed. It must show our duty to forge a world committed to swearing, Never Again," Rivlin continued.

President Rivlin speaking at the cornerstone ceremony in Thessaloniki (Photo: AP)
Thessaloniki, the president said in his speech, was known as "Jerusalem of the Balkans" and had "a magnificent Jewish community, the largest in Greece before World War II. Jews were an integral part of the citizens of the Hellenic Republic." The president spoke about the fate of the Jews of Greece. "Exactly 75 years ago, on March 15, the first transport left for Auschwitz-Birkenau. In total, 90 percent of the Jews of Greece were wiped out in the extermination camps. No other operation to exterminate such a large community was carried out so quickly by the Nazi extermination machine," he said.

Greek Prime Minister Alexis Tsipras and President Rivlin (Photo: Haim Tzah/GPO)
"Unfortunately, there are shadows appearing in Europe, racism is trying again to make impact and monuments are unfortunately again being vandalized. The Museum is part of our commitment to the rights of the people in the whole world to live in the absence of fear," he added.

The ceremony was held on the site of the future museum, in the area of the old railway station from which the Jews of Thessaloniki were sent to the extermination camps.

Also speaking at the cornerstone ceremony were the Mayor of Thessaloniki, Yiannis Boutaris, and David Saltiel, WJC Vice-President for Greece, and President of the Central Board of Jewish Communities in Greece.

At the end of the ceremony, the president and the Greek prime minister planted a tree in memory of 60,000 Greek Jews who perished during the Holocaust.

(Photo: EPA)
Later, the president placed a wreath at the foot of the monument to the Jews of Thessaloniki who perished in the Holocaust.

The monument, located in the center of the city, was desecrated about a week before the President's visit with anti-Semitic graffiti and the emblem of the extreme right-wing movement Golden Dawn.

Rivlin will continue his state visit to Greece in Athens on Wednesday. He's scheduled to visit the Salamis Naval Base, accompanied by Israeli Naval Commander General Eli Sharvit, and Greek Defense Minister Panos Kammenos, and Chief of Staff Evangelos Apostolakis. In the evening, Rivlin will be awarded an honorary doctorate from the University of Piraeus. He will then head back home to Israel.