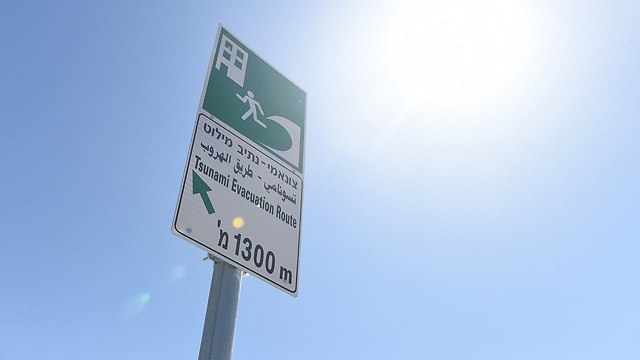 Radar-based systems deployed in Haifa, Ashdod and Hadera to provide early warning for tsunamis; system interlinked with similar stations in other Mediterranean countries; 'Israel has all the ingredients for a tsunami,' expert says. 'Tectonics, earthquakes and a sea.'

A radar-based early tsunami warning system is currently being installed in three central locations along Israel's Coastal Plain—in Haifa, Ashdod and Hadera—dispersed so as to cover the entirety of Israel's Mediterranean coastal strip.

Footage of the tsunami warning system's installation in Israel

The system is interlinked with its "sister stations," ranging from Portugal in the west to Ashdod, the system's farthest southeastern point—as North African countries have yet to install it.

Tsunami warning signs are being put up in strategic locations across Israel's coast (Photo: Diana Hananashvilli/Defense Ministry)
The warning system is capable of locating suspicious seawater activity such as exceedingly high waves or irregular tides and issue a preemptive warning in time periods of up to an hour. Within several months' time, the system will also be connected to Home Front Command's siren system, which will then be able to blare an alarm of an impending tsunami hitting Israel. In such an eventuality, residents will be required to immediately move away from coasts and beaches, whereas people residing on the shoreline will be asked to seek higher ground or flee eastwards. "Earthquakes similar to ones that have already hit Greece and its islands may trigger tsunami waves in our direction," a senior defense establishment official explained to Ynet.

(Photo: Diana Hananashvilli/Defense Ministry)
"Tsunami protection is also important considering the power stations situated near the waterline, such as Tel Aviv's Reading Station and Rutenberg near Ashkelon, as well as water desalinization plants that may be damaged if no early warning is received," he said. The project is being spearheaded by the European Union, and a representative on its behalf will be dispatched to Israel to supervise and assist in the system's installation. The official further added that the "Truah" project is simultaneously going forward full steam ahead, concerning deployment of sensors on Israel's eastern frontier, running north to south, in a region adjacent to the Great Rift Valley. The system's 120 sensors will be able to produce an earthquake warning at extremely short notice, of several seconds up to several minutes, depending on the location of the earthquake's epicenter. The system's installation will conclude and it will be declared operational by 2019.

While the system is being set up in Haifa, the city's municipality put up signs on beaches directing visitors to safe places in case of tsunami. Explanation leaflets outlining the phenomenon's attendant risks will also be disseminated.

The director of the interministerial steering committee on earthquake preparedness, Amir Yahav, said that Israel received tsunami warnings from international warning hubs spread out across the Mediterranean Basin. "The last tsunami warning was received in Israel in July 2017, after an earthquake near the Greek island of Kos," he elucidated.

Dr. Beverly Goodman-Tchernov, a tsunami specialist from Haifa University's Department of Marine Geosciences, explained, "Israel, as well as some portions of the Mediterranean and especially the Middle East, has a history of tsunamis. The region has all the requisite ingredients: tectonics, earthquakes and a sea." Dr. Goodman-Tchernov added that a minor tsunami hit Israel in 1956, but caused no damage. "If you're looking for something that did damage, you have to go back something like 800 years," she said. Yoav Zitun, Ahiya Raved, Alexandra Lukash and Nir Cohen contributed to this report.