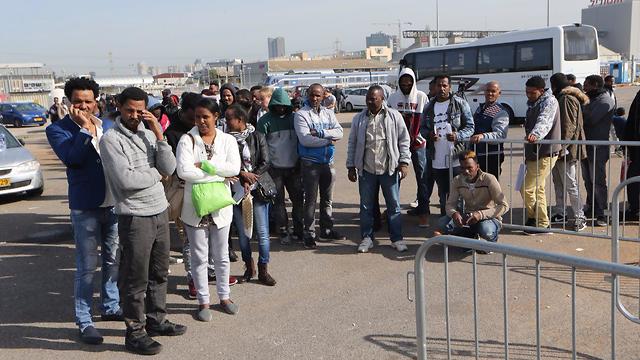 Op-ed: The immigration debate in Israel has turned into a battle with a distorted comparison to Nazi Germany and delegitimization of every thought with a long-term perspective; as if those who support a clear immigration policy are misanthropes with no mercy towards anyone.

The world is divided into predators and prey. Those struggling with obesity, and those suffering from malnutrition. Scientists say the abundance of food will disappear as the population grows. That’s a preannounced tragedy. Life-prolonging science is creating a worse future for the prey and a better future for the predators.

Part of this human reality is the issue of illegal immigration from poor countries to rich countries. Populations from areas stricken with war, poverty and dictatorship will always try to move to more blooming areas. An examination of the political dimension points to a human diffusion from failed countries to stable democracies; a stream which grows weaker or stronger according to environmental conditions, but is always there.

In the Middle East, Israel is the only economically thriving community and is therefore attracting immigration—now and in the future. A fence won’t prevent the reality in which Africa and the Arab neighbors create more and more poverty, backwardness and ignorance which drive away money and reasonable living conditions.

The only reason we aren’t seeing a flow of infiltrators is a tough immigration policy (Photo: Motti Kimchi)

The products can be found in any progressive democracy. For years, the French city of Calais had an immigration facility for thousands of people trying to reach Britain. The place was dubbed “The Jungle” because of the high crime rates and chaos in it. Immigration to the United Kingdom has grown by 40 percent in the past decade, promoting a response. British law, for example, states that a non-EU citizen who earns less than £35,000 will be deported after five years in the country. This expulsion is cruel and intentional.

The United States has been deporting 400,000 people a year for many years now. The numbers increased in the Barack Obama era, and now—with Donald Trump—there is talk about a further increase. The Patriot Act allows immigration authorities to deport people who are perceived as a threat, without any real excuse or reason.

In Australia, since 2013, immigrants are transferred to a third country (Papua New Guinea) for a substantial amount of money. A ship caught in or before the territorial water is dragged to Indonesia, to the island of Nauru or to Christmas Island (countries which did not sign the United Nations’ Convention relating to the Status of Stateless Persons from 1954). Cambodia has also received money as a place where deported people can be transferred to, and detention facilities (“processing centers”) have been built in the islands of Nauru and Manus.

In all these countries, the liberal side has launched a counter-campaign. In Britain, it’s the “No one is illegal” campaign; in Australia, the Supreme Court cancelled some of the measures following petitions, causing the government to enact bypass laws; in the US, there has been public and legal criticism, both founded and unfounded, against every decision or declaration related to the immigration policy since Trump took office.

There is nothing unusual in what is happening in Israel, apart from the complete sense of justice of those opposing the Israeli immigration policy. Israel has a lot to be concerned about when it comes to immigration from Africa, and the only reason we aren’t seeing a flow of infiltrators is a tough immigration policy. If Israel takes in infiltrators as permanent residents, even a high fence won’t be able to stop smugglers from making a profit at the expense of poor Africans headed to the Promised Land.

A country without a tough policy towards illegal immigration puts its own citizens at risk (Photo: Motti Kimchi)

But in Israel, for some reason, the immigration debate—which is taking place around the world between conservatives and liberals—has turned into a battle over the other side’s character. A battle which includes a distorted comparison to Nazi Germany and delegitimization of every thought with interests and a long-term perspective. It’s as if a person who supports a clear immigration policy, rather than “taking them in and seeing what happens,” is a misanthrope who has forgotten what it says in the Bible about welcoming the stranger and who has no mercy towards anyone.

Well, reality is different. The people who determined the immigration policy (from former Interior Minister Gideon Sa’ar to Interior Minister Aryeh Deri), the High Court judges who approved it, and supporters from the outside—like me—are not indifferent to human suffering. There are those who hate for the sake of hatred or populism. They aren’t really important. Most people are sensitive and feel other people’s pain. It’s okay to argue with them, but no one—from physicians to intellectuals—holds a monopoly over justice.

Reality is that an entire continent suffers from a horrible history and a horrible present time, and an analysis of the future points to a tragedy too. It’s horrible, but it doesn’t change the fact that a country without a tough policy towards illegal immigration puts its own citizens at risk. And that is in no one’s authority, regardless of emotions.