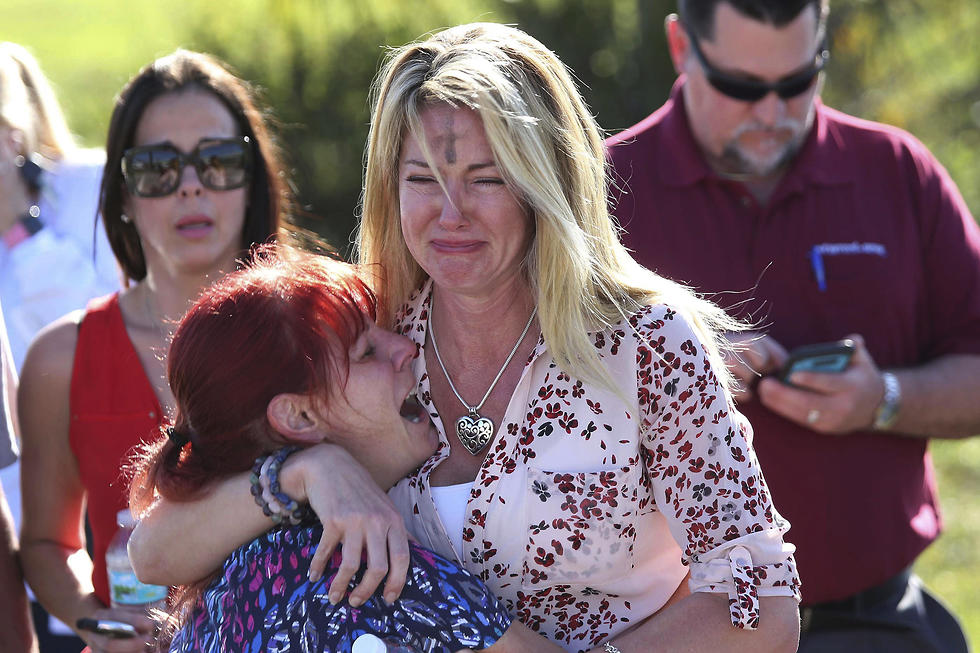 Nikolas Cruz, 19, was expelled from Marjory Stoneman Douglas High School in Parkland, FL; on Valentine's Day, he returned to his former school, set off the fire alarm, and opened fire at students and teachers rushing out of classrooms; present, former students remember him as a 'loner' and an 'outcast.'

A 19-year-old gunman returning to a Florida high school where he had once been expelled opened fire with an assault rifle on Wednesday, killing 17 people and wounding more than a dozen others before he was arrested, authorities said. The shooting at Marjory Stoneman Douglas High School in Parkland, a placid, middle-class community about 45 miles (72 km) north of Miami, ranked as the second-deadliest act of gun violence ever on a US public school campus. The attack began shortly before the school's dismissal.

(Photo: AP)
Television footage showed images, increasingly familiar in America, of bewildered students streaming out of the building with hands raised in the air, weaving their way between heavily armed, helmeted police officers, as a fire truck and other emergency vehicles idled nearby.
צילום: רויטרס
X

Florida's two US senators, briefed by federal law enforcement officials, said the assailant wore a gas mask as he stalked into the school carrying a rifle, ammunition cartridges and smoke grenades, then pulled a fire alarm, prompting students and staff to pour from their classrooms into hallways. "There the carnage began," Senator Bill Nelson told CNN. Senator Marco Rubio gave a similar account on Twitter.

A chilling cell phone video clip broadcast by CBS News showed a brief scene of what the network said was the shooting in progress from inside a classroom, where several students were seen huddled or lying on the floor surrounded by mostly empty desks. A rapid series of loud gunshots are heard amid hysterical screaming and someone yelling, "Oh my God."

The gunman was arrested later outside, some distance from the school in an adjacent community. CNN, citing law enforcement sources, said the gunman tried to blend in with students who were fleeing the school but was spotted and taken into custody.

He was identified as Nikolas Cruz, 19, who previously attended the high school and was expelled for unspecified disciplinary reasons, Broward County Sheriff Scott Israel said at a news briefing hours later.

The gunman surrendered to police without a struggle, Israel said. He was armed with an AR-15-style rifle and had multiple magazines of ammunition.

Victoria Olvera, a 17-year-old junior, said Cruz was expelled last school year after a fight with his ex-girlfriend's new boyfriend. She said Cruz had been abusive to his girlfriend.

As a high school freshman, Cruz was part of the US military-sponsored Junior Reserve Officers' Training Corp program at the school, according to Jillian Davis, 19, a recent graduate and former fellow JROTC member at Stoneman Douglas High.

In an interview with Reuters, Davis recalled his "strange talking sometimes about knives and guns," adding, "no one ever took him seriously."

"I would say he was not the most normal or sane kid in JROTC. He definitely had a little something off about him. He was a little extra quirky," said Davis, who graduated from the school last year.

(Photo: EPA)
Chad Williams, 18, a senior at Stoneman Douglas High school, remembered Cruz as a troubled classmate from middle school. He said Cruz would set off the fire alarm, day after day, and finally got expelled in the eighth grade. More recently, Williams saw Cruz carrying several publications about guns when they ran into each other at the high school. Williams thought Cruz was there to pick up a younger sibling.

"He was crazy about guns," Williams told Reuters by the side of the road near the high school. "He was kind of an outcast. He didn't have many friends. He would do anything crazy for a laugh, but he was trouble."

Math teacher Jim Gard told the Miami Herald Cruz had been banned from returning to campus while carrying a backpack.

"There were problems with him last year threatening students, and I guess he was asked to leave campus," Gard told the newspaper in an interview.

Administrators sent an email to teachers warning them about Cruz, Gard told the paper.

"We already began to dissect his websites and the things on social media that he was on and some of the things that came to mind are very, very disturbing," Israel said.

Daniel Huerfano, a student who fled Wednesday's attack, said he recognized Cruz from an Instagram photo in which Cruz posed with a gun in front of his face. Huerfano recalled Cruz as a shy student and remembered seeing him walking around with his lunch bag.

Dakota Mutchler, a 17-year-old junior, said he used to be close friends with Cruz but hadn't seen him in more than a year following his expulsion from school.

"He started progressively getting a little more weird," Mutchler said.

Mutchler recalled Cruz posting on Instagram about killing animals and said he had talked about doing target practice in his backyard with a pellet gun.

"He started going after one of my friends, threatening her, and I cut him off from there," Mutchler said.

However, Broward County Public Schools Superintendent Robert Runcie told reporters outside the school after the shooting that the school had no indication Cruz was a danger.

"Typically, you see in these situations that there potentially could have been signs out there," he said. "But we didn't have any warnings, there weren't any phone calls or threats that we know of that were made."

Israel said earlier Cruz may have been enrolled at Taravella High School in Coral Springs after his expulsion but the sheriff did not know if Cruz still attended Taravella.

Broward County Mayor Beam Furr said during an interview with CNN that the shooter was getting treatment at a mental health clinic for a while, but that he hadn't been back to the clinic for more than a year.

"It wasn't like there wasn't concern for him," Furr said.

"We try to keep our eyes out on those kids who aren't connected ... Most teachers try to steer them toward some kind of connections. ... In this case, we didn't find a way to connect with this kid," Furr said.

Twelve of the dead were killed inside the school, two others just outside, one more on the street and two other victims died from their wounds at a hospital, Israel said. He said the victims comprised a mixture of students and adults.

The sheriff said at a briefing after dark that investigators had so far positively identified just 12 of the dead, including a football coach he did not name.

"It's catastrophic," Israel added. "There really are no words." Broward County Schools Superintendent Robert Runcie called it "a horrific situation."

Sherrif Scott Israel and Florida Governor Rick Scott (Photo: AFP)
Authorities at two nearby hospitals said they were treating 13 survivors for bullet wounds and other injuries, five of whom were listed in critical condition. The Valentine's Day bloodshed in the racially diverse Miami suburb of gated communities with palm- and shrub-lined streets was the latest outbreak of gun violence that has become a regular occurrence at schools and college campuses across the United States over the past several years. It was the 18th shooting in a US school so far this year, according to gun control group Everytown for Gun Safety. That tally includes suicides and non-injury incidents, as well as a January shooting in which a 15-year-old gunman killed two fellow students at a Kentucky high school. Wednesday's violence marks the second-greatest loss of life from a shooting at a US public school, after the 2012 massacre of 20 first-graders and six educators at Sandy Hook Elementary in Newtown, Connecticut, by a gunman who also killed his mother and himself.

It also is the deadliest ever at an American high school, surpassing the 1999 rampage at Columbine High School in Littleton, Colorado, where two teenagers killed 12 students and a teacher before taking their own lives. Staff and students told local media that a fire alarm went off around the time the shooting started, sparking chaos as some 3,300 students at the school first headed into hallways before teachers herded them back into classrooms. One survivor, Kyle Yeoward, 16, a junior, told Reuters he and about 15 fellow students and a teacher hid in a closet for nearly two hours before police arrived. Yeoward said most of the shooting occurred in the building for the school's freshman class. Anguished parents checked on their children.

(Photo: AP)
"It is just absolutely horrifying. I can't believe this is happening," Lissette Rozenblat, whose daughter goes to the school, told CNN. Her daughter called her to say she was safe but had heard the cries of a person who was shot. The school had recently held a meeting to discuss what to do in such an attack, Ryan Gott, a 15-year-old freshman, told CNN. "My prayers and condolences to the families of the victims of the terrible Florida shooting," US President Donald Trump said on Twitter. "No child, teacher or anyone else should ever feel unsafe in an American school." The school, named for a famed Florida environmental activist and author, was to remain closed for the rest of the week, education officials said.