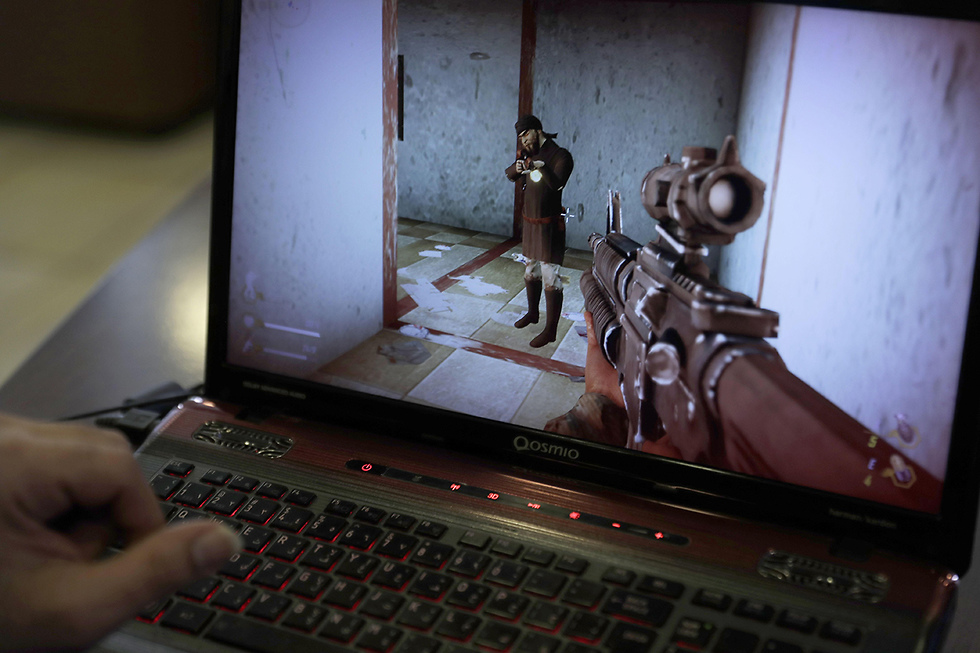 First-person shooter game 'Sacred Defense - Protecting the Homeland and Holy Sites,' a low-cost spinoff of 'Call of Duty,' glorifies Hezbollah's battles in Syria; 'To finish one level and move to the next, the player will suffer. He will see how difficult it is for the resistance fighters,' says developer.

Sidling down the mean streets of Syria with his rifle, he picks off his enemies relentlessly: Ahmed is the hero of the video game Lebanon's Hezbollah movement launched this week.

The Shiite armed group held a ceremony and news conference in Beirut to unveil the latest production of its electronic media department, which it named "Sacred Defense - Protecting the Homeland And Holy Sites." "It reflects Hezbollah's experience in Syria," Hassan Allam, one of the game's developers, told AFP.
Hezbollah's new game
X

With a life of 12 hours, the first-person shooter game is a low-cost spinoff of bestseller "Call of Duty" that glorifies the group's battles in the ongoing Syrian conflict.

The scenario's introductory sequence has Ahmed in plain clothes visiting the Sayyeda Zeinab shrine, one of the holiest sites in Shiite Islam.

(Photo: AFP)
The mausoleum comes under attack and Ahmed reappears wearing a military uniform in a room whose walls bear a poster of Hezbollah leader Hassan Nasrallah.

Hezbollah, which is backed by Iran and is often considered to have more firepower than Lebanon's own regular army, deployed fighters in Syria in 2013.

They have since fought alongside the forces of President Bashar Assad, an intervention widely seen as a major factor in the regime's survival.

Two years into the Syrian conflict, the Assad regime's grip on Damascus was tenuous and its days looked numbered, but it has since regained significant ground.

"The idea took shape from real events on the ground, that took place in Syria, at the Syrian-Lebanese border and in Lebanon itself," Allam explained.

The game, which will sell for $5 in gaming shops, is expected to be particularly popular in Shiite-dominated areas such as Beirut's southern suburbs, where the militia's aura is immense.

Allam said the aim was to make players understand "what really happened and what the fighters who made sacrifices were doing."

Hezbollah has lost many hundreds of fighters, including senior commanders, since it deployed some of its forces to Syria.

"To finish one level and move to the next, the player will suffer... He will see how difficult it is for the resistance fighters," Allam said.

The battles a player has to win to complete the game include fighting in Qusayr against rebel groups in 2013, Hezbollah's first major military victory in Syria.

"Sacred Defense" ends with the Ras Baalbek battle in Syria's mountainous border region with Lebanon during which Hezbollah and Lebanese army troops fought on two separate fronts, which saw the jihadists defeated in the summer of 2017.

In a gamer room in southern Beirut among the first to receive a copy, 25-year-old Hussein Mhanna is testing the new Hezbollah product.

"I don't know where the shooting is coming from," said the young man, who is a video game fanatic but was stuck on level 2. "I loved it, I wanted to shoot everybody."