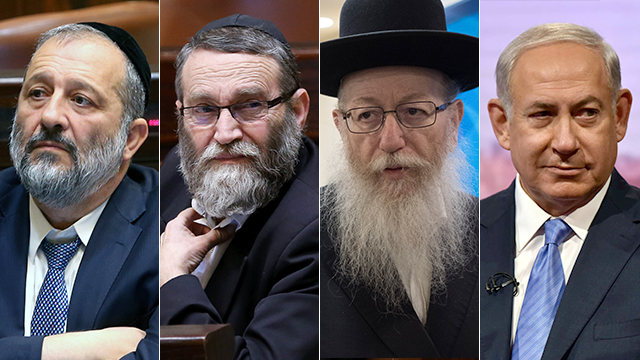 Draft law crisis could lead to dissolution of the government

Analysis: With no apparent solution to the rift between the coalition and the ultra-Orthodox parties on the amendment to exclude Haredim from enlistment and with non willing to compromise, Netanyahu's government faces a break-down.

Despite attempts to reach a compromise that would allow the passing of a Haredi-exempting amendment to the draft law and prevent a crisis in the coalition, political sources estimate that the ultra-Orthodox parties' stubbornness regarding the issue could lead to the dissolution of the coalition.

The Haredi factions Shas and United Torah Judaism (UTJ) are expected to consult with the Council of Torah Sages. Their members previously instructed the faction to refrain from voting on the state's 2019 budget until a new amendment to the draft law is approved.

Haredi lawmakers, though, will make it clear to the rabbis that doing so will lead to premature elections, which may prompt rabbis to authorize them to reach a compromise that will bring an end to the crisis.

L-R: Shas Chairman Deri, UTJ's Gafni and Litzman, PM Netanyahu (Photos: Alex Kolomoisky, Yoav Dudkevich, Reuters)
But a meeting by legislators to discuss the wording of the amendment, which the Likud maintains prevents the coalition from approving it, has not yet been determined.

A senior source in the Haredi parties stressed that the crisis is dire.

"Everyone knew that the amendment to the draft law is the most important issue for us. We have backed Bibi in all his arguments, we do not want elections, but this issue is urgent and critical to us," the source said, referring to PM Benjamin Netanyahu by his nickname. According to him, the ultra-Orthodox parties estimate that this is their last chance in the current coalition to approve the new amendment, instead of the one struck down by the High Court of Justice, and they are therefore conditioning their support of the state's budget on its passing. "This is the only leverage we have," he said. "Netanyahu has two options: Either rein in Evet (Defense Minister Avigdor Lieberman's original name—ed) and be done with the draft (law amendment), or force (Finance Minister Moshe) Kahlon's hand and postpone the budget approval."

Defense Minister Lieberman (Photo: Ohad Zwigenberg)
On Thursday, Lieberman castigated the Haredi parties' attempt to force the approval of the legislation, calling their proposed legislation a "draft dodging bill." He further slammed their apparent holding of the coalition to ransom by using the state budget as leverage as "no less than extortion using threats." Lieberman stressed that his party, Yisrael Beytenu, will "not surrender" to their pressure and will not allow the bill to pass. Kahlon, meanwhile, gave Netanyahu an ultimatum. He said that if the state's budget is not approved within two weeks, he will dismantle the coalition himself, regardless of the ultra-Orthodox parties. As for what will the Haredi faction do should this coalition be dissolved, the source clarified that the UTJ and Shas do not fear elections will reduce the chances of approving their new amendment. "Anyone who wants us in the coalition will have to support our amendment," he explained.

Finance Minister Kahlon (Photo: Alex Kolomoisky)
Culture and Sport Minister Miri Regev (Likud) sent a message to the different coalition parties on Saturday and expressed confidence in her party, warning that if elections are imposed on the government, "there is only one party in the coalition that has no reason to fear elections. It's called the Likud. " Should Netanyahu want to avoid this outcome, he will be forced to find common ground soon, as the state's budget is set to go up for first reading in the Knesset on Monday, with the second and third readings taking place on March 13, and March 15.