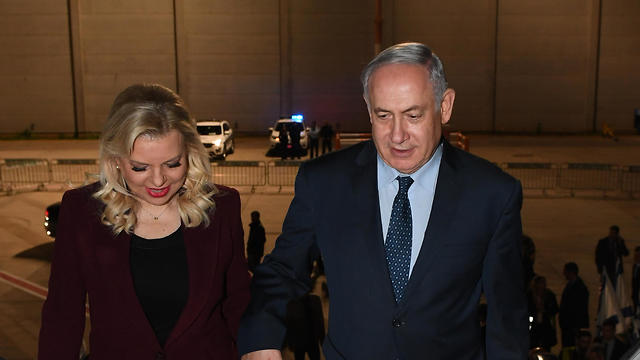 Facing pressure from his ultra-Orthodox flank, which has made its support for 2019 state budget dependent on legislation to enable Haredi yeshiva students to avoid IDF conscription, and threatened with early elections by finance minister if budget not passed, a defiant PM insists ‘goodwill’ can resolve crisis.

Israel will not head for elections in the coming months if “goodwill” prevails among coalition partners to solve an internal feud over IDF conscription, Prime Minister Benjamin Netanyahu said Sunday before his departure to the United States. Last Wednesday, the United Torah Judaism party (UTJ) plunged the government into yet another crisis by pledging not to support the state’s 2019 budget unless an IDF conscription bill, that would solicit state recognition of Torah studies to being equal to military service, was brought for a vote and passed in the Knesset.

PM Netanyahu and his wife Sara (Photo: Haim Zach/GPO)
Since then, Finance Minister Moshe Kahlon (Kulanu) issued an ultimatum, threatened to pull out of Netanyahu’s Likud-ruled coalition if his budget was not passed within two weeks. “There is no need for (to go to early elections) and if there is goodwill it won’t happen,” Netanyahu said while standing with his wife Sara before ascending the plane. “There’s goodwill on my part and I hope that there is also among our other partners.”

But since the crisis erupted, matters only appeared to be getting worse, with government sources attending the late night meetings to solve the problem reporting that the coalition “faces the toughest crisis since its founding.”

Netanyahu was not the only one in the Likud ranks, however, determined to project confidence in the wake of a potentially impending collapse.

Culture and Sports Minister Miri Regev, who is filling in for the prime minister during Netanyahu’s trip to the US, stated during an event on Saturday night dubbed “Miri’s Banquet” that only the Likud could be sure of a guaranteed victory in the event of premature elections.

“If you force elections on us, I am telling you that there is only one party in the coalition that has no reason to worry. It is called the Likud,” she said.

Responding to the display of confidence, the Haredi parties were equally determined to demonstrate their strength among the electorate. “We are no scared of elections. We don’t want elections but the draft law in in our souls. In all the polls we have seven mandates. The person who needs to fear elections is Kahlon.”

Regev also compared Israel's gatekeepers to Bigthan and Teresh from the Book of Esther (read on Purim), two eunuchs in service of the Persian king Ahasuerus (believed to be Xerxes I), whom Mordecai heard plotting to kill the king. Mordecai informed the king through Esther of the plot, and the two were hung in punishment.

"We are chosen by the people, but there are advisors and officials who are used to deciding what is right and not right, they are called the gatekeepers,” she said.

“In the Book of Esther there were also gatekeepers, Bigthan and Teresh, a perfect match. They look stately, maintain the rule of law, ensured there was proper conduct, but it turned out that the moment they didn’t identify with the king and didn’t agree with his management of the kingdom, all that disappeared, their stateliness disappeared as if it never existed, the rule of law became less critical.”

But Regev rejected criticism on Sunday morning, insisting that her words had been “twisted.”

“Indeed, I used motifs from the Megila (Book of Esther). In light of the recent cases of improper conduct between the judge and the investigator, I stood up for the fundamental tenet of democracy—that the people are the sovereign and for the need need for gatekeepers to conduct themselves democratically and in accordance with the rules of proper administration.”