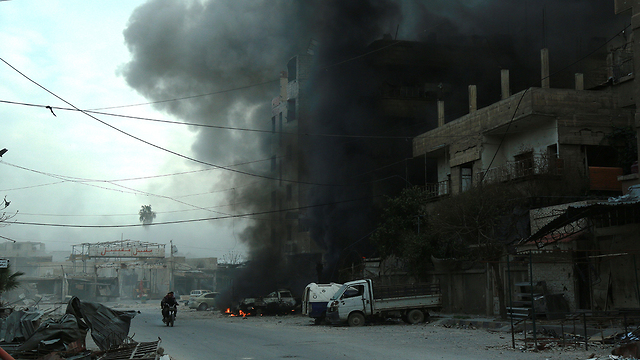 After a fierce battle waged under cover of an unrelenting bombardment, Assad army cuts off two major towns from the rest of the area in eastern Ghouta; Syrian Observatory for Human Rights says more than 1,100 civilians have been killed in the onslaught on the biggest rebel stronghold near Damascus since it began three weeks ago with a withering bombardment.

The Syrian army broke apart the rebel enclave in eastern Ghouta on Sunday, cutting off two major towns from the rest of the area, state media said, after a fierce battle waged under cover of an unrelenting bombardment.

State television on Sunday broadcast from the eastern Ghouta town of Mudeira, which state television and a war monitor said the army had captured to link up with units on the other side of the enclave.

A military media unit run by the Iran-backed Lebanese group Hezbollah, an ally of the Syrian government, said the army had also entirely surrounded the town of Douma.

Footage showed several massive plumes of smoke in the distance behind a war-ravaged townscape with big holes in walls and roofs, and yet more smoke wafting across the streets. The sound of blasts could be heard.

More than 1,100 civilians have been killed in the onslaught on the biggest rebel stronghold near Damascus since it began three weeks ago with a withering bombardment, said the Syrian Observatory for Human Rights.

It said there was intense fighting on several fronts accompanied by a government artillery barrage, continuous air raids and attacks by helicopters.

The advance on Mudeira, after the capture of the neighboring town of Mesraba on Saturday, has driven a wedge deep inside the insurgent territory, leaving the major towns of Douma and Harasta cut off.

Rebel groups in eastern Ghouta have vowed they will fight on. A statement issued by Free Syrian Army factions there late on Saturday said they had taken a decision not to accept a surrender and negotiated withdrawal.

After the army advances split up the enclave, Jaish al-Islam emerged as the strongest group in the town of Douma, Ahrar al-Sham in the town of Harasta and Failaq al-Rahman in the new southern pocket of eastern Ghouta.

Syrian state media also reported army advances near Jisreen and Aftaris in the southeastern part of the rebel-held territory.

Syrian President Bashar Assad and his ally Russia see the rebels as terrorist groups, and say their offensive is needed to end the rebels’ rule over eastern Ghouta’s large population.

But the violence of their assault has prompted condemnation from Western countries and repeated calls by United Nations aid agencies for a humanitarian ceasefire.

Activists and fighters in eastern Ghouta in recent days have said the bombardment has included incendiary material that causes fires and burn injuries. Local doctors have also reported several incidents of bomb attacks followed by the smell of chlorine and choking symptoms.

The government denies using either incendiary weapons or chlorine gas bombs, and said on Saturday it had information that the rebels were planning to stage a fake chemical attack to discredit the army.

In Muscat, US Defense Secretary Jim Mattis said it would be “very unwise” for Syrian government forces to use weaponized gas, citing unconfirmed reports of chlorine attacks in eastern Ghouta.

Visiting Oman, Mattis stopped short of threatening to retaliate against Syrian forces if a chlorine attack were confirmed. But he noted America’s cruise missile strike on April 6, 2017, on a Syrian air base over a sarin gas attack and said President Donald Trump had “full political maneuver room” to take whatever decision he believed was appropriate.

While the government and Russia say they have set up safe routes into government-held territory, no civilians are known to have crossed through them yet.

Damascus and Moscow accuse rebels of firing on anybody who tries to leave, something the insurgents deny though a Reuters witness said there was shelling and gunfire near one exit route on Friday.

Rebels and some eastern Ghouta residents contacted by Reuters have said people there do not want to come back under Assad’s rule for fear of persecution, an idea the government says is groundless.

On Saturday, the army found 60 civilians cowering in a basement in Mesraba. Activists in eastern Ghouta said thousands of people from Mesraba had already fled into Douma, further into the rebel territory, before the army took it.

Syrian state television reported on Sunday that rebel mortar fire had killed four people after hitting a taxi. Assad has sworn to end insurgent shelling of the capital.

Defeat in eastern Ghouta would deliver the rebels their biggest blow since December 2016, when a government offensive drove them from Aleppo, their largest urban stronghold.

Backed by Russian war planes and other military assistance since 2015, Assad has gained momentum on several fronts across the country, driving rebels from numerous pockets and recapturing swathes of the east from Islamic State.

But he is still far from regaining control over the entire country. Rebel groups hold large areas of the northwest and southwest, while northeastern Syria is in the hands of Kurdish fighters and allied militias.

Meanwhile, the increasingly global nature of the war means that military attempts to regain several of those areas could pit Assad and his Russian and Iranian backers against forces that are also directly supported by powerful foreign countries.