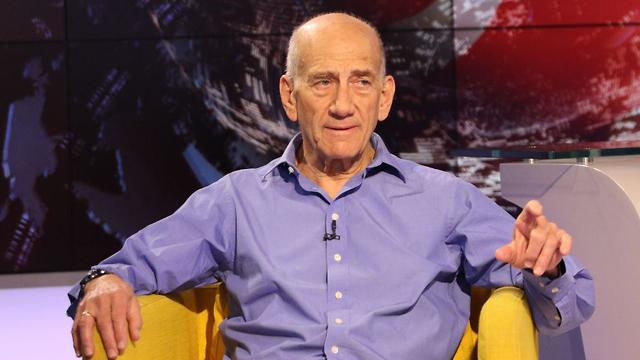 In interview with Ynet, the former prime minister, who served as 16-month prison sentence for corruption, says returning to politics 'is not on the agenda'; says unlike PM Netanyahu, 'I didn't attack anyone as prime minister, my criticism today is done as a private citizen.'

Former prime minister Ehud Olmert stressed on Sunday that he has no plans to return politics after being released from prison last year, where he served 16 months for corruption.

In a special interview with Ynet, Olmert dismissed the question of whether he considered a return to public life, saying "it's not on the agenda."

In a veiled criticism of his successor Prime Minister Benjamin Netanyahu, Olmert claimed that "I've never waged a battle against law enforcement authorities as part of my job, and I never preached about morals. I bore my punishment not with love, but with respect."

The difference between him and Netanyahu, he claimed, was that "I didn't do such a thing as prime minister. As prime minister, I never attacked anyone… I say what I'm saying today as a private citizen, who is not in office."

"The person you're talking about is taking advantage of his status as prime minister to threaten people that he could fire them and that he could disrupt their work. And he's doing that to people he appointed, apparently in some cases while rolling his eyes when talking about the jobs they're expected to have in the future. I did not conduct a public campaign against any of the people who worked against me and investigated me," Olmert insisted.

His advice to Netanyahu is "Bibi, go home fast and in an elegant manner," he said, referring to the prime minister by his nickname. "The faster he does that, the more he would be remembered for the good things he has done, and he has done some good things... if he continues in his conduct, these things would be forgotten."

"I don't wish him my way of suffering, regardless of what he did or didn't do and what his family did or didn't do. I wish us that he would disappear from our lives," he added.

Olmert also criticized former prime minister Ehud Barak, saying he was responsible for the collapse of a deal to return IDF soldier Gilad Shalit in March 2008. "The deal was on the verge of completion, but it collapsed when Hamas saw Barak visiting the Shalit family's (protest) tent. They said 'If Barak is going there, it means we can pressure them more.' He caused serious damage as a result of arrogance and seeking cheap popularity."

Olmert claimed he was "completely acquitted" in the Holyland affair, a major property deal that led to the construction of the hilltop Holyland apartment towers.

But while a five-member Supreme Court panel said it had not been proven beyond reasonable doubt that Olmert had solicited NIS 500,000 from a real estate developer to help his brother Yossi Olmert get out of debt, it upheld his conviction on accepting the smaller amount. Olmert insisted the NIS 60,000 he was convicted of accepting "were given to cover political debts... nothing went into my pocket." While in prison, the former prime minister wrote an autobiographical book, which created some controversy.

Olmert at the Ynet studio with his new autobiography (Photo: Avi Mualem)
"These 900 pages encompass my entire life story," he said. "There are very few people who were witness to the things I was witness to over the past 40 years. This book doesn't go easy on anyone, including myself and my family."

"I talk about my errors and emphasize them. I said very clear things about my errors," Olmert continued. "I regret the fact I sealed by ears and shut my eyes from seeing things that were happening around me, and I didn't know. For example, things that happened with my former aide (Shula Zaken) who took bribes. She's the one who led to my conviction. (But) the fact it happened around me is my failure."

He stressed that "had I known, I would have undoubtedly drawn conclusions. The fact it happened with a senior aide of mine, in the way that it happened, does not release me of responsibility." In an unprecedented ruling that made him the first Israeli former prime minister to receive jail time, Olmert was sentenced to six years in prison, but his sentence was later reduced to 19 months. He was granted early release by the Parole Board after spending 16.5 months in prison. Zaken was convicted for her role in the "Holyland" land development case, which found that both she and then-Jerusalem mayor Ehud Olmert had accepted bribes from property developers to overlook building codes and other restrictions for specific projects.

In 2014, Zaken struck a plea bargain and turned against Olmert to reduce her own sentence. She served only 11 months in prison, and in return provided recordings and new evidence against Olmert.

"The judge said about (Zaken) that she's a 'major criminal,' and she received gifts from state's witness (Shmuel) Dachner worth hundreds of thousands of shekels, and she went to the prosecution and offered 'Make a deal with me, so I don't have to sit in prison,'" Olmert said of his former right-hand woman.

Despite this, he says that "I don't even say a single bad word about some decision by judge Beinisch, for example."

Olmert then went on to quote Supreme Court Justice Mazuz, who was the attorney general who recommended to indict him. "In the first week of his term (as attorney general), I believe, in response to a recommendation made by then-state attorney Edna Arbel, he said: 'The Attorney General's Office is marking targets.' This wasn't said by Olmert, it was said by Mazuz. So the possibility there is over-eagerness that leads the prosecution to make inappropriate decisions definitely exists, and it was definitely there in my case," he claimed.

He then went on to attack Lador, the state attorney at the time of his investigations. Olmert said that after the first time he was questioned in May 2008, Lador "demanded the court to order a sitting prime minister, after only an hour of questioning, to sit in the dock during the preliminary hearing. This means that in the mind of the state attorney, after an hour of question, I was already a defendant that needed to sit in the dock, rather than a suspect who is given the presumption of innocence. Lador committed serious criminal offenses."