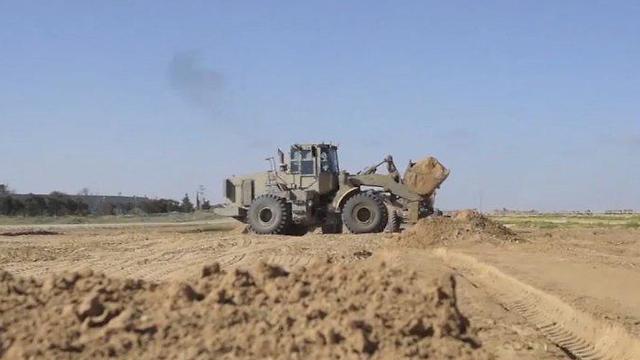 Analysis: In response to Israel’s new anti-tunnel technologies, the Palestinian organization is now focusing its efforts on putting tunnels that were destroyed during Operation Protective Edge back into operation; According to military estimates, however, Hamas is still digging additional tunnels.

Hamas is diverting its resources to a different route, cheaper than its flagship plan to dig attack tunnels against Israel: Rebuilding underground tunnels and spaces that were neutralized by the IDF during Operation Protective Edge and putting them back into operations—and there were more than 30 such tunnels along the Gaza border.

This trend has been detected by intelligence officials in the Southern Command who are monitoring Hamas’ tunnel project. The change is likely being implemented in response to Israel’s new anti-tunnel technologies. Nevertheless, the IDF believes Hamas is still digging additional tunnels.

The new branch of the old tunnel running from the city of Rafah to Kerem Shalom in the southern Gaza Strip was monitored by the security forces for several months, but at no stage did it threaten the Gaza vicinity, IDF sources say. The routine was maintained the entire time, and civilian and agricultural life was barely limited, “till the very last meter.” At the same time, the intelligence and operational spotlight was directed at what was going on underground, as the Hamas diggers progressed towards the border.

Eventually, the tunnel’s exit in Israel was located near the border fence, several hundred meters from Kibbutz Kerem Shalom, which has already experienced some tunnels. This time, officers say, the IDF chose to completely neutralize the tunnel by flooding it with a huge amount of concrete that would seal it and render it unusable.

The operational, technological and intelligence effort to complete the tunnel’s neutralization was consolidated at the Southern Command’s “tunnel lab”—the “brain” that integrated all the anti-tunnel activities.

Shortly before Operation Protective Edge, the Air Force had bombed a large, significant tunnel excavated towards Kerem Shalom, burying Hamas terrorists inside. The move was one of the main triggers of the war that broke out in the summer of 2014. The IDF has yet to confirm that it’s the same tunnel, but as far as we know, it was the only tunnel in the Kerem Shalom area that was dealt with and neutralized during Operation Protective Edge.

So far, within less than six months, the IDF has dealt with seven terror tunnels—six Hamas tunnels and one Islamic Jihad tunnel. Hamas is considered more experienced, knowledgeable and professional in digging tunnels, and has succeeded in making adjustments to its tunnels in its learning race against the IDF.

Four of the tunnels detected in the past six months were neutralized by engineering forces above the ground after approaching or “touching” Israeli territory, and the other three were bombed by warplanes. The last one was bombed Saturday night in Gaza’s Zeitoun neighborhood in retaliation for several improvised explosive devices planted along the strip's border recently.

The obstacle being built along the Gaza border (Photo: EPA)

According to military estimates, additional tunnels will be uncovered and neutralized in the coming months. Defense Minister Avigdor Lieberman went as far as promising Sunday morning that Hamas’ tunnel project would be destroyed by the end of the year.

But IDF officers, especially those in charge of the area’s security, are practicing caution when discussing the technological success based on advanced sensors detecting the underground spaces. It’s quite possible that even after additional tunnels are destroyed in the coming year, Hamas will succeed in activating a terrorist force through a tunnel or a “tail” of a tunnel which have not been detected, and that may be portrayed as a failure of the defense ministry’s massive plan against infiltrating tunnels, in which Israel has invested more than NIS 4 billion.

In addition to the tunnel detection technology, the IDF has stepped up its construction of an underground obstacle on the Gaza border in several places that are believed to be facing a bigger threat than others, including the area across from Nahal Oz, Sderot and Netiv Ha’asara in the northern Gaza Strip.

The work on this project continues almost all week long, from Saturday evening to Friday afternoon, and is carried out by hundreds of workers, mostly foreigners from countries like Turkey, Romania and Moldova, as well as Israeli Arabs. The fear that Hamas or members of rebel organizations would to sabotage the work has led to the erection of a land battery in every such construction site to defend the workers from sniper fire, machine guns or antitank missiles, and each laborer is required to wear a helmet and a bullet-proof vest at all times—or pay a fine. The IDF has allotted dozens of fighters to protect the workers throughout the day.