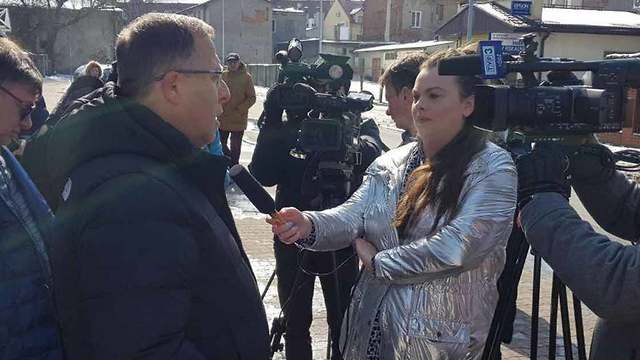 A delegation of Israeli students was set to hold ceremony with Polish youths from sister city of Radomsko near Łódź, but speech by Kiryat Bialik mayor containing references to Polish collusion in Holocaust led to its cancelation after mayor refuses requests to change, censor it; Poles 'demanded we write they involved Ukrainians and 'German Nazis' instead of 'Nazis,' Mayor Dukorsky said.

A speech by the mayor of Kiryat Bialik, containing references to Polish participation in World War Two atrocities, led to the cancelation of a ceremony set to be held in the country with local youths and students from his city.

In light of the new Polish law banning the attribution of crimes against humanity to Poland as a nation during World War Two, the ceremony—planned to be held Monday morning in Radomsko with the participation of Kiryat Bialik students and Polish youths—was canceled. The cancelation was caused by a speech Mayor Eli Dukorsky—who was accompanying the students—was set to give and that he refused to censor, as it dealt with events in which Poles participated in the murder and humiliation of Jews. The Israeli delegation settled for holding a ceremony of its own in its stead.

Kiryat Bialik Mayor Dukorsky (L) in the Plaszow concentration camp this week (Photo: Kiryat Bialik municipality)
A group of some 200 Kiryat Bialik students and educators left for Poland last week and visited the country's ghettos and death camps. As every year, the journey was expected to conclude with a joint ceremony including youths from Kiryat Bialik and its sister city Radomsko in the Łódź province. The ceremony was set to be held in the same square from which the city's Jews were sent to their deaths during the Holocaust. "I prepared a speech that included stories based on my mother's personal experience during the Holocaust," Dukorsky told Ynet. "We submitted the speech to be translated to Polish and received in response a demand to censor events that involved Poles and to write (instead) they involved Ukrainians and to write 'German Nazis' instead of 'Nazis.' "I refused to censor (it). I've been in contact with the Ministry of Foreign Affairs and Deputy Minister Tzipi Hotovely. I've kept them abreast of the matter and received backup." Dukorsky's original speech also shared the experiences of Kiryat Bialik resident Luba Taubler, whose family was attacked by a Polish farmer. The speech read, "Luba was born and raised in Bystrzyca, where many Jews were slaughtered by Polish farmers assisting the Nazis. "Her mother's entire family was slaughtered and destroyed. Two hundred thousand Jews were murdered by Poles in that war, 200,000 of the six million Jews murdered by the Nazis and their accomplices. "Not all Poles collaborated with Nazi Germany. Many among them were Righteous Among the Nations who saved Jews by putting them up in their homes at risk to their own lives and to the lives of their families. But it should be said, too many Polish citizens collaborated with the Nazis and were partners in the darkness enveloping the world." Radomsko's local authority ended up informing the Israeli delegation the ceremony was canceled. "We'll hold the ceremony alone, without Polish partners," Dukorsky said Monday morning, "where I'll read the original speech. Some things cannot be hidden. This is a classic case of Holocaust denial." The delegation will return to Israel Monday night.