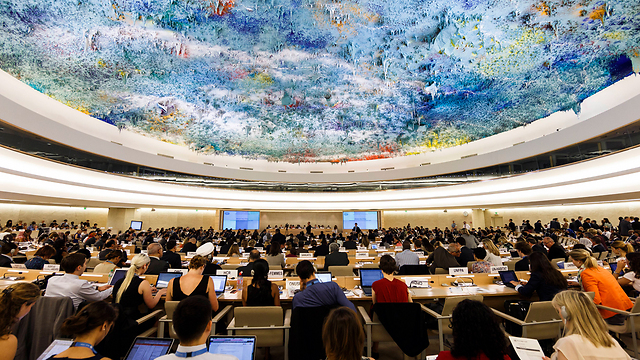 Op-ed: The automatic majority against Israel in the United Nations Human Rights Council is not going to change. But last Friday, the number of opposing and abstaining states was higher than in previous votes, which is why Israel shouldn’t rush to quit the council just yet.

Five anti-Israel resolutions have created once again, and rightfully so, a feeling that “the entire world is against us.” But a meticulous examination of the distribution of the votes actually points to a small positive change.

We already know there is an automatic majority against Israel in the United Nations Human Rights Council. That’s a given situation. But last Friday, the number of opposing and abstaining states was higher than in previous votes.

In spite of the small change it has gone through, the UNHRC remains one of the most unenlightened UN institutions (Photo: AP)

In spite of this small change, the UNHRC remains one of the most unenlightened UN institutions. It deals with Israel more than any other international body, and the level of hypocrisy there has reached heights which cancel the need for satire shows.

“When the Human Rights Council treats Israel worse than North Korea, Iran, and Syria, it is the council itself that is foolish and unworthy of its name,” US Ambassador to the UN Nikki Haley said in the statement, reiterating the American threat to quit the council. It has happened in the past.

Before the council, there was a commission that had chosen Libya to lead it. It was so ridiculous, that the UN decided to replace the commission with a council. But the problems repeated themselves. The US quit during the Bush era and returned during the Obama era. And who knows, we may soon see another US withdrawal from the council.

The UN institutions aren’t impressed by America’s threats, although they are being realized. For example, the UNESCO budget cuts following the American withdrawal are expected to seriously affect the organization’s budget. But the anti-Israel resolutions, over which the US is withdrawing, have no effect on the automatic majority. There isn’t much logic there.

There is no need to rush into leaving the council, as the number of anti-Israel resolutions won’t be reduced. The council provides an open stage to bodies like the UN Watch, whose speakers are heard all around the world and who serve the Israeli interest.

Furthermore, despite the adoption of hostile resolutions, we are seeing signs of change. So there’s no need to give up. We must expose the lies and hypocrisy. And for that purpose—at least for now—Israel must remain in the council and take advantage of the stage it is being given.