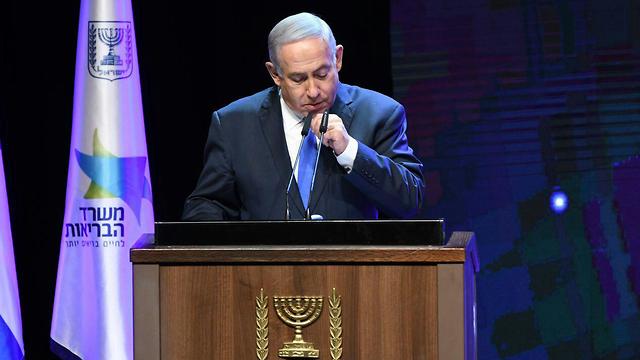 Prime Minister Benjamin Netanyahu was hospitalized in Hadassah Medical Center in Jerusalem’s Ein Kerem Tuesday evening due to suffering from a high fever and a severe cough.

After undergoing medical examinations, doctors decided that he would be discharged the same night.

His personal physician, Dr. Berkowitz, said that he believes the prime minister's symptoms from an illness he was suffering two weeks ago may have worsened due to not completing the period of rest required for recovery.

Doctors said he was suffering from an inflammation in his respitory system and that he was not in life-threatening danger.

Dr. Berkowitz decided that the prime minister should undergo a number of medical examinations at the hospital, and he was therefore admitted.

“To our dear prime minister, I wish you a speedy recovery. It is important to me and the entire nation of Israel that you are healthy as you sit with your dear family for the Passover feast, that you eat a lot of Haroset and ever a a few butter herbs. Be healthy!” he wrote on his Twitter account.

Labor Party Chair Avi Gabbay also sent Netanyahu his best regards, wishing him fast recovery so he can sit with his family on Seder dinner.

After being given fluids and having his medical test results affirm he is in no danger, doctors approved his release. He returned to his home shortly after.

Deputy Health Minister Yaakov Litzman said he was "happy to hear" Netanyahu's medical teasts came back normal and that he felt better.

"I hope that with the help of God in the coming hours he will recover and return to full functioning soon," he said, wishing the premier a "speedy and complete recovery."

Two weeks ago, the Israeli premier complained that he was not feeling well After undergoing a series of medical examinations, Dr. Berkowitz diagnosed him with an inflammation in his throat and a fever and instructed him to rest in his home a prescribed him medication.

Last week, an a round of questioning in a corruption probe at which he is at the center was canceled due to his falling sick. He was also compelled to cancel his participation in a number of events.