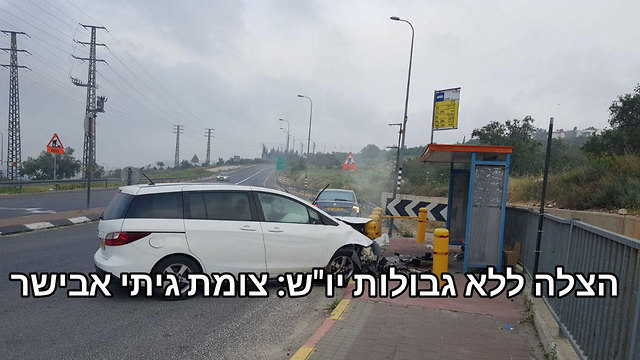 Driver who rammed car into bus stop wasn't a terrorist

Initial probe of motives of man who rammed his car into a bus stop near Ariel, before being shot dead by security forces, say he was not a terrorist, but a criminal who stole a car.

An Israeli Arab driver was shot to death by IDF forces on Tuesday morning after crashing into a bus stop at the Giti Avisar intersection in the West Bank, in what investigators concluded in their preliminary findings was not a terror attack.

The motive was not immediately clear, but investigators said that the incident was of a criminal nature, that the driver, Iyad Azbarka from Qalansawe, was carrying no weapons and that he had not intended to carry out a terror attack.

Azbarka crashed into the bus stop and then attempted to flee the scene on Highway 5 near the settlement of Ariel. Soldiers from the Efraim Territorial Brigade who saw him escape and opened fire at him.

According to the findings of the probe, he tried to escape on foot from a stolen vehicle after a car chase. No one else was injured in the incident.

Investigators are now examining why the soldiers from the Kfir Brigade opened fire on the fleeing driver.

(Photo: Rescuers Without Borders)
“A driver crashed into the hitchhiking stop … and tried to escape and was shot on the spot by IDF forces at the scene,” an IDF statement said after the attack. “He was evacuated to receive medical treatment and later died from his injuries. The identity of the driver and the motives are being investigated.”