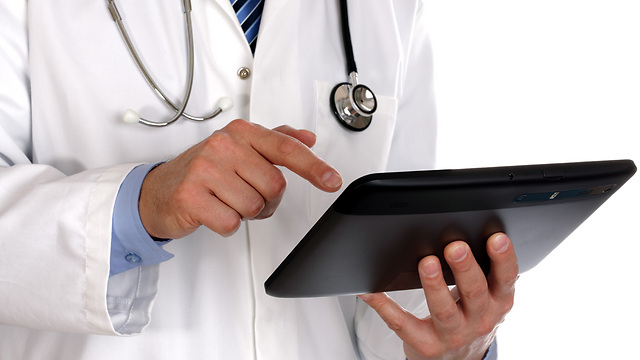 Digital health database would make medical information of Israel's population available to researchers in an effort to help diagnose trends and develop better medication worldwide; amid concerns for privacy, PMO says information security would be in place and patients can refuse use of their information in research.

Israel has launched a domestic digital health database that could make it a global medical powerhouse. The move aims to improve public health worldwide but critics warn it risks compromising personal privacy.

Eli Groner, director-general of Prime Minister Benjamin Netanyahu's office, said the system could help prevent disease by pairing each individual with his or her own relevant data. With easy access to a person's medical history, he said it may be possible to become informed of a looming disease before one actually contracts it. "The database will be unlike anything in the world," Groner said.

File photo (Photo: Shutterstock)
If successful—something he said depends on the number of those willing to participate—the database could be shared with medical researchers globally and help diagnose trends and help develop better medication worldwide.

Digital health records are valuable. Big data analytics—comparing information provided by large numbers of patients—give some of the world’s biggest drugmakers indications of how medicines perform in the real world.

Netanyahu said world leaders and international firms have already shown interest in the project and that the potential revenue for Israel could be in the billions of dollars.

All the world’s major drug companies now have departments focused on the use of real-world data across multiple diseases. Several have completed scientific studies using the information to delve into key areas addressed by their drugs.

They include diabetes studies by AstraZeneca and Sanofi, joint research by Pfizer and Bristol-Myers Squibb into stroke prevention, and a Takeda Pharmaceutical project in bowel disease.

Groner said the launch is expected by the end of 2018, stressing that divulging data depends on individual consent and that teams are now hammering out details on how to ensure maximum privacy. The innovation is possible in part because of Israel's relatively small size and already centralized health care system. Most of the country's 8.7 million citizens are members of four main health care providers (HMOs), which have been maintaining their records digitally for years. The new database aims to collect all the information in one place. During a recent Cabinet meeting, Netanyahu said the $275 million project is of "historic significance" and that its goal is to improve "preventive medicine" and also achieve "personal medicine, personally calibrated for each person."

The announcement comes as Facebook's privacy practices have come under fire following revelations that it failed to prevent the data-mining firm Cambridge Analytica from amassing personal information about millions of users and that the social network has been collecting Android users' phone call and text message histories without notice.

Critics say the selling of medical records for profit could spell disaster for patient confidentiality.

Nadav Davidovitch, head of the Public Health School at Ben Gurion University in southern Israel, voiced concern that private companies would profit by using a publicly-funded database while continuing to make some medication unaffordable to many patients.

A statement from Netanyahu’s office said that mechanisms would be put in place to keep information anonymous while protecting privacy, information security and restricting access as part of the government project.

Patients will be able to refuse the use of their information for research, the statement said.

Tehilla Shwartz Altshuler, a senior fellow at the Israel Democracy Institute, said even data entered anonymously does not guarantee long-term confidentiality and it is unclear what uses will be made in the future with data disclosed now.

"Medical records are the most private information you could think about, it includes DNA, bloodwork, all medical history," she said. "Stuff you may not want insurance companies, employers, spouses, whoever to know—you don't even want Facebook to know so that it won't be able to mesh it up with other information it has about you."