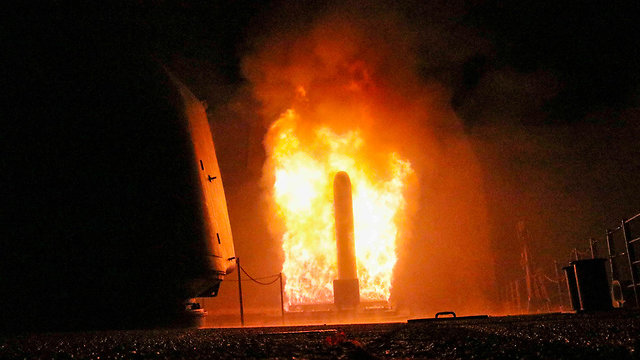 Syrian state television reported early Tuesday that the country's air defense systems intercepted missile attacks at two military bases in the country. Media outlets affiliated with the regime of President Bashar al-Assad reported that the attack—in the Homs region—was aimed at the Shayrat base, situated southeast of the city. State television showed pictures of a missile that was shot out of the air above the airbase mere days after a US, British and French strike on Syrian targets in retaliation for a suspected chemical attack on the city of Douma on the outskirts of Damascus.
Footage of alleged missile interception in Syria
X

The Shayrat base itself was attacked last year by American forces as a punitive measure following an earlier chemical attack by Assad's regime in Khan Shaykhun.

An American Tomahawk missile launched at Syria during Saturday's strike (Photo: AFP)
The American Defense Department quickly put out a statement in the wake of the reported attack saying, "There is no US military activity in that area at this time." "We do not have additional details to provide," Pentagon spokesman Eric Pahon said.

The Reuters news agency reported the IDF Spokesperson's Unit declined comment as well, and no reports pointed a finger in blame at Israel thus far.

As it stands, it appears the attack was orchestrated by local rebel forces, acting as proxies for an Arab, American or other interest in the region—similarly to the activities of the Houthi rebels in Yemen being directed by Iran.

A senior Syrian military official said six missiles were launched at a military airbase on the Homs suburbs, and three additional projectiles targeted a military airfield in a-Dumair, on the Damascus outskirts. The Syrian Observatory for Human Rights war monitor confirmed the launch at the Syrian capital's suburbs. An initial report attributed the attack to fighter jets. The New York Times quoted a senior IDF official Monday as saying that the attack on the T-4 military base that claimed the lives of 14 people last week was carried out by Israel. The official confirmed to the Times that the strike on the Tiyas Military Airbase in Syria's Homs last week was intended to hit Iranian installations and personnel.

The strike on the T-4 base was blamed on Israel

In the rare admission of Israeli responsibility for a strike, the officer told Friedman, "This is the first time we saw Iran do something against Israel, not by proxy. This opened a new period."

Hours after the article was published, the paper's senior analyst added that the IDF Spokesperson's Unit rejected the report, stressing that Israel does not comment on foreign publications.

Deputy Hezbollah leader Sheikh Naim Qassem told pro-Syrian government television channel al Maydeen he expected a reaction to the deaths of the Iranian personnel—including the commander of the elite Quds Force's drone unit—which Iran blamed on Israel. "The deliberate Israeli slaying of Iranians in the T-4 base will have a response but we don't know its nature or its details," Qassem said in the television interview.

Six Iranian personnel were killed in the strike, including drone unit commander Col. Dehghan (top left)
On the backdrop of recent events, the IDF has deployed forces in increased numbers in the Golan Heights, both on the ground and the air, in preparation for a potential Iranian retaliation. The United States, France and Britain attacked a series of targets in Syria this past weekend in retaliation for the regime's chemical attack on Douma two weeks ago. US President Donald Trump addressed the nation early Saturday, saying he had ordered "precision strikes on targets associated with the chemical weapons capabilities of Syrian dictator Bashar al-Assad." In the subsequent strike, more than 100 missiles were launched at structures associated with the country's chemical weapons capabilities, with Syria claiming that its air defense systems intercepted and diverted the trajectory of most missiles. British Prime Minister Theresa May also verbally attacked Assad Saturday afternoon, saying, "Anyone using chemical weapons against his own people will be punished."

In a statement to the press, May said Britain had unequivocal proof that Assad was behind the Douma attack, and that he continued harboring additional chemical weapons with the intent of using them.