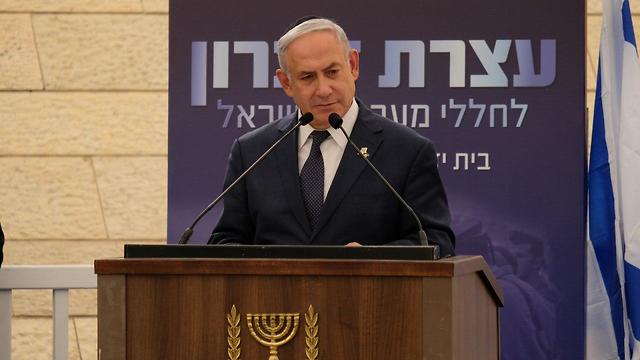 Netanyahu: ‘We bow our heads in memory of our loved ones’

Comments come as Israel begins national mourning during Memorial Day at annual ceremony in Jerusalem commemorating Israel's fallen soldiers and victims of terror, attended by senior government officials and hundreds of bereaved families; ‘My parents, too, cried out for my fallen brother.’

Prime Minister Benjamin Netanyahu said Tuesday that the people of Israel "bow our heads in memory of our loved ones, whose blood has seeped into the soil of our homeland," as the nation began marking the annual ceremony commemorating Israel's Memorial Day for IDF Fallen Soldiers and Victims of Hostilities.

Hundreds of Bereaved families and senior Israeli officials attended the event held at the Yad LaBanim Memorial in Jerusalem, solemnly sharing their stories and expressing appreciation for those who sacrificed their life and loved ones for the nation.

The prime minister expressed his sympathy towards the bereaved families, recounting a funeral of a fallen soldier he attended several months prior, in which he witnessed the soldier's mother break down in tears and grief, crying out for her son.

"My parents, too, cried out for my fallen brother," Netanyahu related, referring to his brother Yonatan—an IDF officer in a special forces unit who fell during a hostage rescue operation that saved dozens of innocent lives. He was the sole IDF fatality of the operation.

Bereaved families standing in a moment of silence for the loved ones they lost (Photo: Yoav Dudkevitch)

"I cannot explain how we lived through the days of the bitter news, and the following days, weeks and months.

"All families have their own agony, and every family is heroic in its own way. To choose life after such heartbreak is altruistic," he noted, alluding to the pain one must silently endure to not saddle others with his tragedy. "I met, together with my wife, many bereaved families who chose life through commemoration of the fallen, commitment to the country, concern for others, responsibility, kindness, and having a shoulder to lean on. And on this special day we stand shoulder to shoulder as a united nation that sees clearly the foundations of its continued existence," he continued. The premier went on to mention those still held captive by Israel's enemies, as well as those wounded in terror attacks, wars and conflicts throughout the nation's tempestuous history, affirming they haven't been forgotten for "even a moment." "The message left by the fallen is loud and clear; our lives may be too short, but we have ensured the life of the nation in perpetuity. They have given us the opportunity to live. Thanks to them we are here," he concluded.

(Photo: Reuters)
Edelstein, who also spoke briefly at the ceremony, assured attendees their sacrifice was not made in vain, and that Israel will continue protecting itself and its people. "We know full well, and all our enemies know: Our spirit has not faltered, our hearts were not softened, our fingers clasped around our weapons and our shields have not loosened," he stated firmly. "Those who are hiding in a tunnel planning to harm us—we will reach them even deep beneath the earth. Anyone with a knife or a stone in his hand who wants to push us out of the alleys of Jerusalem or the hills of Judea and Samaria will be chased until his hands are severed. "We will continue the vision left to us by the fallen. We remain full of life and faith; that even if the road is long, even if the obstacles are great, we will never forsake our land."

Knesset Speaker Edelstein (Photo: Yoav Dudkevitch)
In an open letter to Israel's bereaved families, Defense Minister Avigdor Lieberman expressed his gratitude for their sacrifice and his hope for a better tomorrow. "We have great hope that in the coming years we will no longer live by the sword, and we will be able to invest in science and technology, agriculture and economy and in the development of the treasures of our wonderful country.