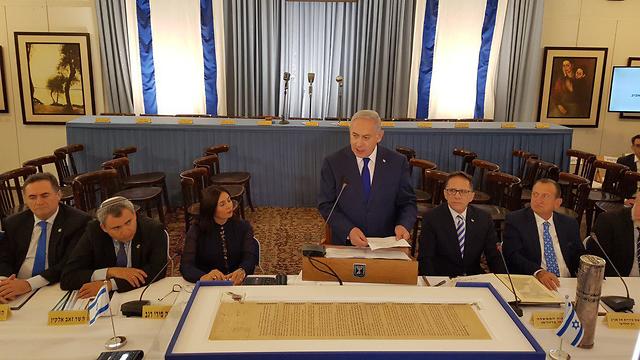 Netanyahu: IDF is ready for any development with Iran

Speaking at a special government confab at Tel Aviv's Independence Hall to mark Israel's 70th birthday, the prime minister vows to 'exact a price' from anyone seeking to harm Israel, says no matter the cost, 'the nation will endure.'

Prime Minister Benjamin Netanyahu issued a stern warning to Iran on Friday morning, promising that despite the threats that have been emanating from Tehran against Israel, the IDF will “exact a price” from anyone seeking to harm its people. “We hear the threats from Iran. IDF fighters and the security branches are ready for any development. We will fight anyone who tries to harm us,” Netanyahu said as the government convened in a special celebratory meeting at Independence Hall in Tel Aviv to mark Israel’s 70th birthday.

(Photo: Shaul Golan)
“We will not be deterred by the cost and we will exact a price from those who seek our lives. The IDF is up to the task, and the people will endure," Netanyahu told his ministers and government officials.

Last week, while Israel remained silent on an attack on the Tiyas Military Airbase in Syria's Homs, senior US government officials told NBC new that Israeli fighter jets carried out the airstrikes and informed the White House of its intentions beforehand.

With Russia pointing the finger at Israel shortly after the attack, a senior IDF official told the New York Times that the strike, intended to hit Iranian installations and personnel, was carried out by Israel.

Defense Minister Avigdor Lieberman stressed last week military preparedness and security would need to be bolstered, taking the cue from Iranian Foreign Ministry Spokesman Bahram Qassemi who threatened just hours prior that Israel will regret the "misdeed" of striking at the T-4 airbase.

'Israelis are proud of the state'

At opening of Friday’s meeting, ministers signed the digital Israeli declaration of independence, with Netanyahu focusing on the elation with which Israelis celebrated the country's 70th birthday. “We are holding today this special government meeting as part of the 70th anniversary celebrations of the State of Israel,” the prime minister said in his opening remarks.

“We have all participated in the moving events to mark 70 years of our independence in which public joy was particularly prominent. The citizens of Israel are proud of our state. They love it and they know how to appreciate its achievements in every sphere,” Netanyahu continued.

“The joy and the pride are not ordered from above—they spring from the heart. Several months ago we decided to restore and refurbish this building. It is fitting that the restored Independence Hall be a main heritage site in our country and so it will be.”

Offering a brief history of when the founders of the state convened in Independence Hall to declare the independence of the Jewish State in the Land of Israel, Netanyahu extolled the restoration of Jewish sovereignty.

"The 5th of Iyar 5708 is a unique date in our history. On it, in this room, the members of the People's Council gathered. They decided on the establishment of a Jewish state in the Land of Israel. In so doing they restored to us political sovereignty in our land," he said.

“‘'The State of Israel has arisen; the exile of Israel is over,'” he added, quoting Israel’s first prime minister David Ben-Gurion after declaring Israel’s independence.

"I add: And the Jewish People have been reborn. Because if the state had not been established, Heaven forbid!, the Jewish People would have shriveled away in exile and perhaps taken awful blows again. It is doubtful whether we would have had another opportunity to establish our sovereignty,” Netanyahu surmised.

The premier went on to say that the establishment of the State of Israel has "created a national center for our people in which there is no assimilation and in which there has been constant growth. It has given us strength. It has infused us with spirit. It ensures our future.

"Seventy years ago—the masses danced in the streets. But it was clear to Ben-Gurion that a difficult struggle would soon be upon us. The enemy sought to destroy us but Ben-Gurion believed in us and in our determination. He said this when enemy planes bombed Sde Dov airfield in Tel Aviv: 'I went home slowly and then I saw—the people were not afraid! I saw the same faces that I saw in England during the Blitz. And I said in my heart—these people will endure!,' Netanyahu continued, drawing the parallel with modern-day Israel.

“We also stand fast against those who would destroy us. We are certain of our ability to defend ourselves by ourselves—which is the essence of controlling our fate, the essence of independence,” he said before thanking Israel's allies, particularly the US, for its birthday wishes.

He thanked the president of “our strong ally,” US' Donald Trump, and also Russia’s President Vladimir Putin. “These greetings reflect Israel's rising status among the nations.”