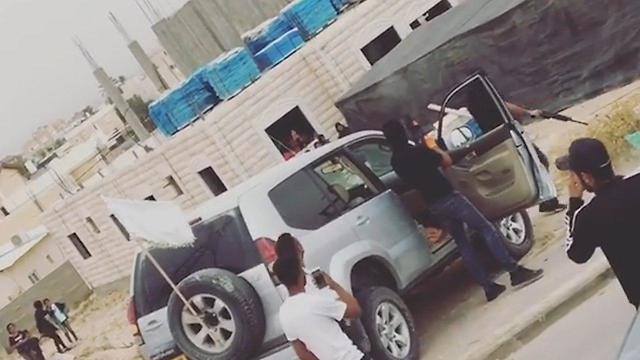 Video footage of young men shooting into the air and engaging in other reckless behavior during a wedding celebration in a residential neighborhood of the Bedouin town of Tel Sheva, outside Be’er Sheva, is causing outrage among locals who say such behavior will end in disaster.

The footage shows two masked men exiting a vehicle and carelessly letting off automatic fire. The crowd standing around filmed the men with their cell phone cameras.

Police say the incident was apparently related to a wedding celebration and occurred when the groom was making his way over to the bride. Police later arrived at the scene but found nothing. They were then called to another shooting incident on Highway 40 with police putting out word that both incidents are being investigated. The groom was detained for questioning and other suspects are being sought by the police as well.

Shooting at wedding
Only after the videos were widely released among the general public did the police announce that they had detained the groom in the hope that the other suspects would turn themselves in.

Shooting guns at weddings is a common occurrence among the Bedouin of the Negev but it occurs in the north of the country as well. It is meant to demonstrate the strength of the family.

Local residents fear that the phenomenon of shooting guns at weddings inevitably endangers lives and they expressed outrage at the incident. Some blame the police for not doing enough.

Shooting in air at wedding
X

Shooting in air at wedding

The elders of the Bedouin community have in the past announced that they do not intend to participate in celebrations that include shooting into the air as a sign of joy. Despite the efforts, the troubling behavior continues. One resident said, “I call on all dignitaries to come out decisively against anyone who fires during weddings. The shooters endanger our lives and may harm us. Such events can end in disaster. Many people have already been injured by gunfire, and some have become disabled and wheelchair-bound. Apparently we do not learn from mistakes. "In most weddings we witness shooting, and even when I am at home I hear the shots, it's like a war. This phenomenon needs to be dealt with professionally before disaster strikes. The police must stop every wedding or party where there is shooting," he said.